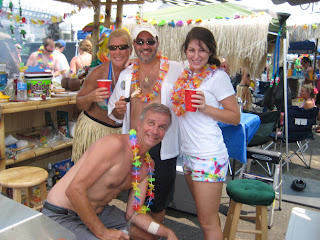 Yes, we couldn't resist, and did it again....! While it meant a weekend away from the boat, it was worth it, as we had 2nd row center seats at Philadelphia's Citizen Bank Stadium, with Dan and Trish Carney, Allison and her dear friend, Claire Messano. Ally had just finished her week at tennis camp in Florida that morning; Claire and I picked her up at the PHL and then rejoined the others for an entertaining afternoon of tailgating, people watching and music at our own little "Tiki Bar" amongst the hundreds of other parrotheads. The weather was brutally hot and humid, and of course, it wouldn't be Buffett if it didn't rain....and rain it did!! Right after G Love opened the show, a huge thunderstorm cell aimed right at the stadium, drenching us all in the outfield. After a bit of a lightning delay, we commenced to rocking out with Jimmy and the Coral Reefers for the next two hours, uninterrupted and undeterred by the continuing rain and drizzle. As usual, Jimmy seems to truly enjoy his summer job! It was a GREAT concert, with all the old favorites and gold standard songs; while it didn't have the synergy of a new album/CD like last year's "Take The Weather With You" Tour, it was, for us, still fabulous after all these years! After his encores, Jimmy threw his wrists bands to the audience, with one aimed DIRECTLY at Allison...who was most bereft when she dropped it!! As the kind souls in front of her bent to retrieve it for her, another woman to the left snatched it up and kept it herself. Luck of the draw, I guess...but it was intended for Ally!!

It was a great time, a family event that made memories to cherish and enjoy. Here we are!
Hugs to all, Karyn and Ron at 4:38 PM