...in many variations!! We've had a few days to re-group and re-focus on projects closer at hand! We're back on the bicycles and working on getting in some mileage before our upcoming trip to California, in between coordinating the extra projects we want done on Equinox. From cosmetic re-painting topsides to bottom painting and thru-hull strainer cleaning, to work on the dive compressor, Equinox is being tweaked into prime shape! Ron was at the boatyard yesterday to see how things were progressing with her bottom painting, and took these photos of Equinox in the ACY paint facility wrapped up tight like a huge cellophane gift bag! Work is going along well, and Equinox will be all the more beautiful after her pampering! 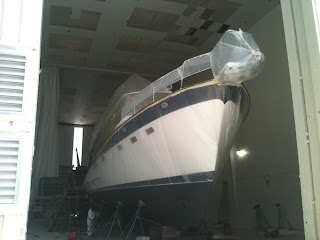 Practically gift-wrapped: all she needs is a brightly-colored
gift bow on the bow! 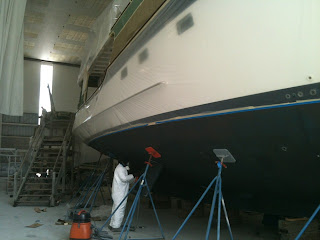 Equinox's hull and thru-hull strainers getting a bit of attention.
It always amazes me how large she is out of the water.
While Equinox is inside and safely on the hard, we've been watching the line of hurricanes coming across the Atlantic. Hurricane Earl is a not too much of a concern for Florida, as it looks like its predicted path is to our north. North Carolina and the mid-Atlantic states are  scrambling, and I shudder looking at the size of Earl...it's now a Category 4 storm, with its barometric pressure now down to 932 millibars. While we're not even in the cone of tropical force wind speeds, seas are huge. Gulf Stream hazards for our area today: "LARGE SWELLS PRODUCING SEAS UP TO 18 FEET"!! It's unsettling, knowing Tropical Storm Fiona is behind Earl, (now predicted to pass near Bermuda) with Tropical Storm Gaston lined up behind Fiona, followed by yet another grouping of unsettled weather coming off the coast of Africa. Will it never end? 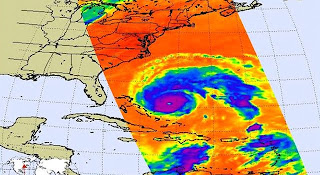 AIRS infrared image of Hurricane Earl on Sept. 1, 2010 shows the temperature of Earl's cloud tops
or the surface of Earth in cloud-free regions. The coldest cloud-top temperatures appear in purple,
indicating towering cold clouds and heavy precipitation. Image credit: NASA/JPL-Caltech
As a diversion, we've had our own local land-based bit of excitement. Tuesday afternoon when we stopped at a beachside restaurant and bar on Hutchinson Island with some friends, we found the place alive with excitement and abuzz with news, as a small 32' boat had washed ashore almost right in front of the restaurant that morning. When you looked at the huge waves crashing ashore -- seas were reported to be 7-10' offshore -- you wondered what in the world anybody in their right mind was doing out there to begin with!! Then, to have engine trouble and be at the mercy of the sea in horrid conditions...beyond scary! 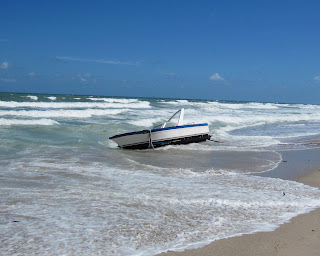 A local condo resident saw someone abandon ship as the boat was wallowing perilously close to shore, immediately notifying the coast guard of a ship in distress. It didn't take long before the boat was tossed aground onto the beach, and shortly thereafter, there was no mystery as to why the boat was out there: authorities came to find that the boat contained about 1,100 lbs. of neatly-packaged marijuana!! NO WONDER the boat was in distress -- that's more than half a ton!! The local papers reported that the estimated street value of the  pot was more than $1 million dollars, and when we peered down the beach at the crowd of onlookers gawking at the boat, we realized the place was crowded with police, DEA, and Customs and Immigrations officers. While they detained all cars and traffic leaving the island trying to find the man who abandoned the vessel, no one was detained and "agents are still investigating". Yep, always an adventure on the Treasure Coast!! 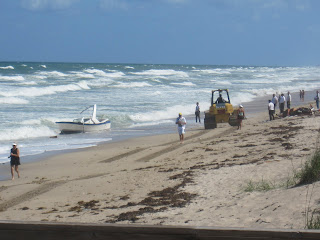 A back-hoe arrives to pull the boat out of the waves
Hugs to all, Karyn and Ron at 11:24 AM