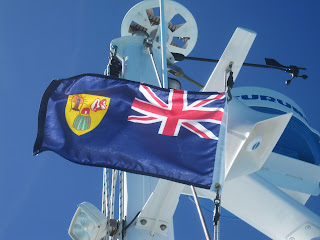 Well, it wasn't really a week, as we only stayed in the T&C a couple of days, but it was delightful to revisit this lovely island archipelago. After our magical passage, we arrived at Grand Turk bright and early on Sunday morning, and called on the VHF to inquire about clearing Customs. We had a very nice fellow on the radio who assisted in finding out if Customs was open, but he was extremely doubtful anyone could help us. We thought this quite strange...why wouldn't anyone be around to help us? True, it was Sunday and we knew we'd probably have to pay an overtime charge to clear in, but what was the big deal? Well...up popped an unexpected wrinkle in time, shall we say? A true peril of living aboard is that one forgets what day it is -- hence, the reason we have a "day clock" aboard which notes no time, just the days of the week. So while yes, we knew it was Sunday, we totally were ignorant of the fact that it was EASTER. Yep, a major holiday, and thus no matter what, we found that there would be NO customs clearance at Grand Turk! We were told that we might find a Customs officer available at Providenciales, if we were lucky....but no exploration of Grand Turk for us!

While that threw us off a bit, we decided that we may as well head to Provo since the weather was so lovely. It was already too late to make it in concert with the high tide needed to get into South Side Marina, so as we headed back south we paused to take a dive mooring off Salt Cay for an hour or so, where we indulged in a great wall dive before heading off across the Columbus Passage towards the Caicos Bank. Again, a big part of living aboard is the ability to improvise! Plus, it was too pretty a day and we simply couldn't resist!

After a fairly comfortable passage across the Columbus Passage, winds picked up from the west and made crossing the Caicos Bank a bit choppy. Short, sassy waves were slapping the bow, and we had to endure that annoyance until just after dusk. Fortunately, having spent so much time here last year, we were very familiar with that area of the Bank, but it didn't ease our vigilance as the light waned. We moved in towards Cooper Jack Bay just after darkness fell, and anchored in the lee of the small islets lying offshore.

The next day we revisited South Side Marina, happy to be back. We had contacted Bob prior to our arrival, so he knew to expect us, and was there on the docks as we pulled in. As usual, we were warmly welcomed by the marina dogs, Effie and Gemma once we were tucked into the slip! It's always a good feeling to revisit one's favorite ports, and SSM was our home for several months last year. A few things had changed in the months since our stay, one of which was the new Customs fees for entry. It used to be that a stay of 7 days was allowed before a cruising permit was needed; those who wished to stay longer purchased the 3-month cruising permit that was the norm. Now, though...it costs $50 dollars just to clear in, and another $50 to clear out, regardless of length of stay. Coming in on the Monday after Easter? Still a holiday, so an additional $10 was needed. Ouch!

Nevertheless, we had a great stay. We did some provisioning at the IGA, and after tidying up the boat, chatted with the other folks currently in the marina. Later in the day, Ron brushed off the Caicos conch horn and announced the sunset gathering of folks under the marina cabana, where we relaxed with Bob and as well as enjoyed the camaraderie and company of other cruisers. Nice that some things DO stay the same!
Hugs to all, Karyn and Ron at 5:32 PM