Cruising in our backyard, the Chesapeake

We've done a couple weekends back to back over in Fairlee Creek, on the Eastern Shore of Maryland, meeting up with various friends and having them raft up with Equinox while we're on anchor. For those who haven't been there, Fairlee Creek offers both a marina and a protected anchorage inside a large cove. Getting in through the cut can be tricky at times, depending on the time of the tide and the resulting current that rushes through, but once inside, the river is a great place to anchor, swim, wakeboard, tube or water-ski. 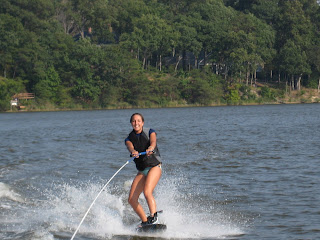 Ally always has a smile on her face wake-boarding or skiing. She loves it!

With our good-sized ground tackle and all-chain rode, we prefer to dig in and set it well so that we can rest easily at night. Despite how calm it can be on some summer nights, the current always affects our deep hull, so we will swing, even in no wind. (Wind doesn't seem to affect us as much, since we're so heavy, but the current definitely does.)

The only drawback to Fairlee is that it is a very popular anchorage, and often, it becomes quite crowded. This often results in watching the "anchoring olympics": watching folks anchor who clearly haven't done it before or (worse) haven't a clue as to how to put out enough line to keep the anchor set. Forget having them even think about the appropriate swing room needed between any nearby boats...!

The first weekend we were there, we too had a bit of difficulty anchoring, but only because we fouled the anchor on a huge, 50' long aluminum piling that was lying on the riverbed. I can say that with certainty, because our windlass pulled the entire thing up out of the water! It was scooped up in our Delta anchor, caught almost precisely at its middle, so was teetering out to either side as we pulled it up. Ron came out of the PH to check it out, because he couldn't believe what I was telling him. We managed to slide the anchor off the piling on the first try, thankfully!

Later, we were joined by Dan and Trish Carney along with their friend Cynthia, aboard Serenity on Saturday. They rafted up to us and we were delighted to find we had a crab feast planned, thanks to Ron's ingenious buying of nearly a bushel of crabs from a local waterman, who happened to be working his crab line in the river. I steamed the crabs in Old Bay that evening and we all ate like kings! Perfectly done (if I say so myself), heavy and sweet!! We had enough left over that I picked crab meat for the next two days, making crab dip, crab balls and crab-mango-avocado stack appetizers.

This past weekend we were with the Messanos aboard Clairbuoyant, and again, enjoyed ourselves thoroughly. The kids all went tubing and wakeboarding, and Ally and I went skiing as well. A great place to spend a hot summer weekend, for the breezes on the flybridge were wonderful!
Hugs to all, Karyn and Ron at 4:42 PM