The 4th of July was another active day, full of fun and sun! We took Tingum out for a bit of diving in the morning, off east side of Great Guana Cay. Vicky and Jim relaxed aboard while Jay, Ron and I meandered through the coral tongue and groove formations below. While it wasn’t an especially remarkable dive, we saw several critters from Pederson cleaning shrimp, banded coral  shrimp, to a nice lobster. Ron even spotted a leatherback turtle before it took off. Always fun to be underwater!
Once on the surface after the dive, we noticed the same large turtle at the surface some distance off…and staying up an unusually long time. We quietly moved the boat closer to find not just one turtle, but two good-sized leatherback turtles, mating! How cool is that?? (Of course, no one had their cameras, either - darn!) Leatherbacks are endangered species, so just seeing one is a treat, but seeing two actually mating was pretty spectacular. The two were clinging together, bobbing about and totally oblivious to our presence; I’m pretty sure the female was just happy to be allowed to get her head above water now and again to breathe!! According to National Geographic, leatherbacks are the largest turtles on Earth, for they can grow up to 7 feet long and can exceed 2000 lbs. Their inky-blue carapace is different from other turtles in that it is somewhat flexible and almost rubbery to the touch, and is very hydrodynamic. Leatherbacks can dive to depths of 4,200 feet—deeper than any other turtle—and can stay down for up to 85 minutes. (Guess I needn’t have worried about the female!) We moved off after a bit so as not to disturb them, but again, what a special experience!
In the late afternoon, we tried our hand at fishing offshore south of Great Guana, near Scotland Cay, but to no avail, the fish weren’t hungry. Nary a nibble! While Jay was happily dealing with the outriggers and lures, the rest of us intermittently napped or nodded off in the shade beneath the t-top – always a necessity after a day on the water! By evening, Grabber’s had their own party vibe going on once more with a Regatta party around the pool and on the beach. Live music and contests, including Grabber’s Hermit Crab Races, were only part of the festivities! After a leisurely dinner at Grabber’s, we walked over to Nipper’s for some late night music, dancing and fireworks on the beach. Quite the day, with many ways, to celebrate the 4th! 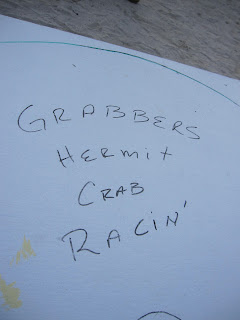