What A Difference A Day Makes!

Goodness....what a breezy weekend! After Bret blew through on Sunday, the weather settled quite quickly. I thought for some reason, that it would take several days for the storm to clear out, but both the winds and the seas calmed within a day. Who knew? So...while we had blue skies and calm seas once again, we used the time to our advantage! We hopped in Tingum and ran down to Little Harbour, home of the famous Johnston sculpture gallery and foundry, as well as Pete’s Pub. Ron and I have been to Little Harbour before, but always in the off season, when the foundry was closed or when Pete's was undergoing renovations and nary a soul around. This time, though, we enjoyed the place leisurely, with lunch at Pete's: triggerfish sandwiches with peas and rice, along with seabreezes on the beach. Nice! 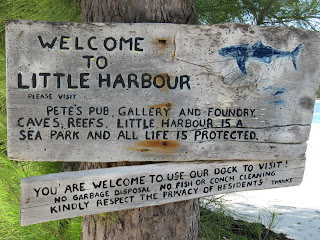 Little Harbour was established by Randolph Johnston, his wife Margot and their three sons, who sailed into the glorious little safe haven back in 1951. There were no other inhabitants or signs of man at that time except for the distant Little Harbour light; Ran and his family actually lived in one of the large caves along the high cliffs around the west side of the cove until they built themselves a house! The family has been here in Little Harbour ever since: Rand established a foundry and gallery, and years later, Pete's Pub was established by Pete Johnston, Rand's middle son. Despite numerous setbacks including fires and hurricanes, the gallery, foundry and pub are still in existence, having been re-built or renovated over the years. The place is fascinating to see, and a testament to the resiliency and resolve of the Johnston family.
The foundry is known for its unique bronze sculpture, made using the "Lost Wax Process" that employs a technique first used when bronze casting was discovered over 5000 years ago. Artwork by Randolph and his sons is known world-wide, with one piece of Rand's "St. Peter the Fisher of Men" residing in the Vatican Museum in Rome. The foundry is managed by Pete, and his sons Greg and Tyler, who continue their father's and grandfather's craft. The gallery contains sculptures large and small, from dolphins, turtles and other sea life to original works by Rand Johnston. 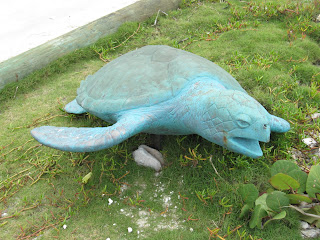 We enjoyed our time at Little Harbour immensely before returning to Equinox. We went ashore for a fun celebration in honor of Muriel’s birthday; we watched a  glorious sunset over dinner at Curly Tails right on the Marsh Harbour waterfront. Delicious food, good wine....ah! Plus, it was followed by another layer cake made by Chef/Capt Ron! A full day, and one much appreciated after the appearance of TS Bret! Who knows what will blow in tomorrow?
Hugs to all, Karyn and Ron at 1:57 AM