Class Crustacea Cirripedia, Or What the Hell is Growing On Our Hull?!? 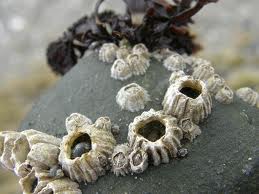 We cleaned our hull yesterday. We’ve done this before, and it’s usually a very easy job to swish and swipe along the waterline to remove any grime or hint of a mustache. Sometimes we’ll even snorkel or dive on the deeper parts of the hull to swab off the funny discoloration/ marine peach fuzz that can start to appear after a long while. We’re pretty good about doing it, and as we just had the bottom freshly painted this past September, the hull has stayed quite clean. It’s actually an easy job, and in clear Caribbean waters, one of the more fun chores.
However, while we were stateside in January for a couple of weeks, Equinox was safely berthed in a slip at Jolly Harbor. Unfortunately, the water clarity there is slim to non-existent due to its marshy, mangrove origins, and Equinox was sedentary enough that we noticed a weird grassy beard on the waterline, along with a scattering of tiny barnacles and white wormy things beginning to grow on our bottom, aft transom and underwater lights. We chose not to clean the hull there, so we waited until we were in slightly cleaner and clearer water, farther south in Falmouth and Mamora Bay. When we dove on the hull, we couldn’t believe how the barnacles had proliferated!!
On closer inspection…what the hell else was growing on our hull??? There were the typical whitish barnacles, some tiny little pips, others about the size of a dime, all over the place (for some reason, the port side was much worse that the starboard), and there were some other ones that were darker and larger, some with these large, feathery protrusions. Ugh!! The wormy encrustations were the hardest to remove, although a bit of vinegar along the water line and a lot of elbow grease did the trick there. Below the waterline, they had to be scraped off or brushed off with a very stiff bristle.
We used our scuba gear to dive on the bottom to thoroughly scrape off the barnacles. The little tiny ones were no issue, popping off easily like bits of chaff, but the larger ones that had feathery blooms coming off them were another story. When they were scraped off, they left some sort of “barnacle cement” that would eventually come off cleanly with a second tap or two with the scraper or more scrubbing…it made the job much more time consuming, but I didn’t want to leave anything behind in case it would give creatures easy purchase to re-attach themselves.
But….the worst part?? All sorts of bizarre and other-worldly creatures came out of them. Tiny little shrimp-like things, about the size of a grain of rice, would rain down as I scraped. ICK!! They grossed me out, I have to admit! Even though I was wearing a hood, I didn’t want these ugly little critters in my hair, my ears, my wet suit or elsewhere. Ick ick ick!! Even worse: when I came up after a good hour of scrubbing and scraping, I had these little barnacle shrimpy maggots all over my wet suit, and in the creases and flaps of my BC. GROSS!!!! Need I say that major rinsing and de-contaminating followed on the aft transom?!?
I can now see why divers are paid so much to clean hulls!! This time was disgusting! We never had this much sea-life on our hull before, but then, we were in colder, clearer waters farther north, where the creatures apparently exert less effort to hitch a ride, or at least take longer to do so. But you can bet we will be much more vigilant in the future to keep these warm water critters off Equinox! Whatever they are and wherever they came from, we are NOT having them on our hull if we can help it!
Gosh…the beauty of a clean hull. Who knew cruising would have such unexpected pleasures? Oh, the adventures we have!
Hugs to all, Karyn and Ron at 8:08 PM