...well...it's been a bit somnolent around here lately, not being aboard. There's no interesting journeying and cruising to report, so it feels a bit boring! We've basically just been attending to small boat projects and the like. We had the engine room detailed yesterday... just a good scrub-down, although it was actually pretty clean to begin with, in all fairness, since Ron is pretty diligent in that regard. As we're gearing up to have the boat hauled next week, it just feels good getting her cleaned up. I have a couple small items I still need to attend to myself -- changing out the holding tank vent filter for one -- which Ron says is now my job, since I have no sense of smell! It's an easy task, but not without odor, so I have to admit it's nice that I'm unaware of any unpleasant scent. Still, I'm not sure if I consider that an upside to having lost my sense of smell!
Other than that, we've been doing a bit of maintenance on ourselves! I had some annual health checks completed (all good, thankfully) and earlier this week, Ally had all four of her wisdom teeth taken out. X-rays showed that they definitely needed to come out, as all were impacted and one was aiming to come in sideways against her existing teeth. The surgery  went smoothly and without complications, thankfully, thus it's been a week of medical attention, recuperation and rest for us all. 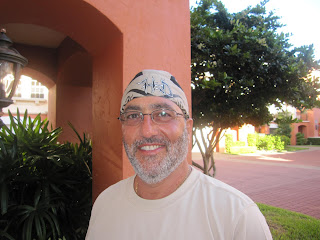 Ron's been the only one not dealing with medical issues. Instead, happily, he's been having a bit of fun for himself, as he got himself a new Harley-Davidson motorcycle and is totally enamored with it. (Although neither Ally nor I are enthusiastic about motorcycles, Ron's enjoying riding immensely....but I'll just stick to my bicycle, thank you!) However, the bike is something Ron's wanted for a while now, and he recently aced Florida's mandatory motorcycle safety/licensing class a couple of weeks ago. We've seen that riding is a very popular past time here in Florida what with the typically nice weather and lovely water views.  It's one way to keep busy while the boat's on the hard during hurricane season, I suppose! 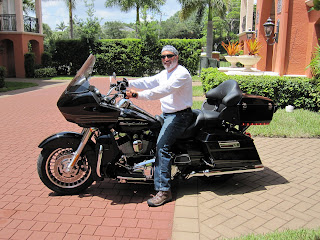 Ron's new Harley Davidson Road Glide Ultra
Oddly enough, Florida is actually cooler than parts of the midwest and south that are in the grip of an intense heat wave right now! We've had temps in the upper 80s and lower 90s, but that's typical for this time of year, yet nothing like what the rest of the south has seen. Who would have thought Kansas would be hotter than Florida in July and August? Ah, Mother Nature! Speaking of the heat, Ron and I are headed over to the marina shortly, to check in on the boats and go enjoy a little pool time!
Hugs to all, Karyn and Ron at 4:00 PM