More exploration of the French Quarter

Another day, another tour....much to Ron's dismay, actually. His shins are really bothering him from all the walking yesterday, although we're not sure whether it was due to the hard concrete pavement, his island selection of footwear (water sandals) or, more likely, simply the sheer mileage that we covered yesterday! I admit, I changed into running shoes at lunchtime, since my feet were starting to bother me then as well, since my sandals were threatening blisters. We covered a lot of ground!
In any event, despite the foot fatigue, we still went on the morning walking tour of "Le Creole Monde", which provided an interesting glimpse into the life and times of the French quarter back in its early days. The tour focused on a memoir written by a Creole woman named Laura Lacoul, (1861-1963) who wrote about her French Creole family's way of life on their plantation and in the French Quarter, along with the history of its four earlier generations. It was an interesting peek into history, a true story of how Europeans, Free People of Color and slaves became part of one family dynasty. We got to see inside some of the residences owned by the Lacoul family, as well as inside a few other private courtyards in the French Quarter. Ever notice how desolate and shuttered the fronts of the French Quarter homes look from the streets? It's because the residents are all happily relaxing inside their beautiful courtyards, away from the noise and bustle of the city. The courtyards were amazingly serene, and it was neat to see such historic places still in full use.
We also got a bit of US history thrown in as well, as the tour included a stop at the New Orleans Pharmacy museum, where America's first licensed pharmacist practiced in the early 1800s. The tour focused on the role of the pharmacy in the 1800s and how ladies of the era would congregate there at the soda fountain for news and gossip while the men were at work or the bars. The old pharmacy building itself is interesting, but the archaic items inside even more so!
Our final stop (so to speak) was at the St. Louis Cemetery No.1, the oldest and most famous cemetery of the city. Opened in 1789 just one block north of the French Quarter, it has been in continuous use since its founding. It's a bit more battered than the Lafayette cemetery in the Garden District, but much older. Its exposed brick, the cracked and chipped granite, the rain-stains on the plaques, the sheer number of vaults all crammed together all add up to an eerie atmosphere. Probably why this is where they filmed the cemetery scene in "Easy Rider"! Some vaults are nothing but rubble, others well kept, and families from all walks of life, French, Spanish, English, black, white, all side by side. There are vaults from some of the soldiers who died in the Battle of New Orleans in 1815,  to Marie Laveau, the "Voodoo Queen" of New Orleans who died in 1881. In fact, the vault for a former mayor of New Orleans, Ernest Morial, who died in 1986 is just a few steps away from hers. Time seems to truly blend together here. 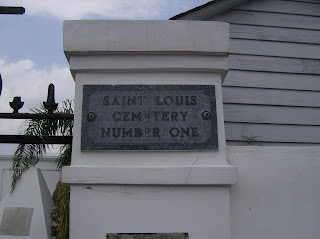 People still come and leave offerings at Marie's tomb, marking it with the gris-gris XXX before doing a little ritual of respect and leaving tokens of tribute in order to ask for favors. Voodoo came with the slave trade in the 1800s, directly out of West Africa and its influence was widespread since many of its practitioners were also healers. Voodoo was seen as a way to protect yourself and your loved ones, and is still very much alive and well in New Orleans, a definite part of its character and soul, as much as jazz and gumbo! A little "love and luck", anyone?
Hugs to all, Karyn and Ron at 8:42 PM