You'll see Amarillo and Gallup, New Mexico
Flagstaff, Arizona don't forget Winona
Kingman, Barstow, San Bernadino
Would you get hip to this kindly tip
And go take that California trip?
Get your kicks on Route 66” 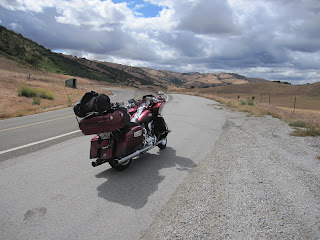 Originally written by Bobby Troup in 1946, “Route 66” has been done by numerous artists from Nat King Cole to The Rolling Stones. It’s always struck me as a great road trip song, as  the mention of all those places inspires a bit of wanderlust. Plus, it gives voice to the sense of freedom you feel while traveling! While Ron didn’t follow Route 66 exactly, he did stop in several of the places in the song as he rode his Harley west! His route from New Orleans took him through Houston to Amarillo to Santa Fe and Flagstaff, then Kingman and Barstow, before heading to the California coast to head up to Santa Cruz, San Francisco, Livermore, and Tahoe. He’ll bike an hour or so, then stop and get off the bike to relax, stretch a bit, get water to stay hydrated and enjoy the view wherever he is, then continue on,  generally doing 5-6 hours of riding a day. He’s been very lucky with the weather; while it's been windy and gusty in spots, he’s not had to deal with any rain, managing to evade the few storms that brewed on the horizon along his route. So far, it’s been a fabulous trip! He’s stopped to visit his step-brother along the way, as well as our friends Sarita and Ralph in California. I’ll be meeting Ron in Vegas next week, when I fly in with my folks for my younger sister’s wedding. Fun family times ahead! 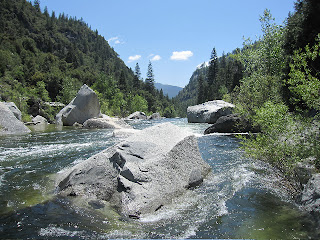 Meanwhile, I’ve been getting a lot accomplished, trying to coordinate necessary boat work. The starboard chartplotter VEI monitor is now out, getting retested and repaired at the manufacturer, and the wind indicator module is undergoing similar testing as well. We're in the midst of getting a new manifold for the AC cooling system lines in place, as the old one was so incredibly rusted as to be falling apart. I’m so grateful that we stopped in at Kadey-Krogen to pick up our order of some replacement engine room lights, because they suggested we check it since other boats were having issues with them. I would never have found it myself -- in fact, I was totally ignorant that it was there! The manifold for all the AC lines was located behind an access panel inside a narrow cabinet down next to the wine cooler in the office. The manifold definitely needed replacement, and let me tell you, it was done none too soon!! Whew. More proof that maintenance and inspection done regularly will save your butt!
Being on the hard myself (since the boat isn't moving from her slip anywhere soon) I put the time to good use and spent several days in a motorcycle safety course! I decided that I didn't want to be just a passenger anymore, and I wanted to feel comfortable actually running the bike, so a class was in order. (It's actually a requirement in Florida, needed to get your motorcycle  endorsement on your license.) There were six of us in the class, one older gentleman who was getting back into riding, and four young men who were already using scooters or sport bikes as their main modes of transportation, so not only was I the only woman in the class, I was also the only one who had absolutely no clue as to how to ride! Who ever said life is boring? I think there is always an adventure awaiting!
The class wasn’t easy, as I had some problems with certain skills when handling the bike at slow speeds (completing double U-turns in a tight box were a trouble spot for me, as I repeatedly kept having to put a foot down now and again to keep my balance on the bike). The rider coach was very personable, very good at teaching the proper techniques for the safe handling of a bike, and very encouraging, which helped immensely when I was feeling frustrated. I even dropped the bike on one such practice run on the u-turns since I violated rule number one: don't look down! (Instead, look where you want to go, and you will go there!) Argh! Thankfully, nothing bruised but my ego in that mishap.
I would have loved to have had a bit more time to polish all the new skills I learned before the final evaluation test, but time was limited. SO...I had to focus and simply demonstrate my abilities as best I could! (Not everyone passes the course, so I was more than a bit worried!) And, of course the U-turn portion of the test was first up, immediately followed by an acceleration run to demonstrate a sharp swerve and avoidance of an obstacle. Argh! But, I just took a deep breath and tried to relax myself on the bike while I awaited my turn to start. (I mean, I can scuba with sharks, so...I can DO this!) Happily though, I did the u-turns perfectly during the exam -- who would have thought?! It was sweet too, because as I pulled to a stop after my run through the first part of the course, all the guys were cheering that I had done it! From then on, I knew I'd do well on the remaining portions of the test, and I did: I passed with flying colors!
While I now have the minimum skills for safe riding under my belt, I realize they are just that, the minimum, so believe me, I will continue to practice!! Whether on land on Route 66 or at sea, the same rule applies: you can never be too careful out there!
Hugs to all, Karyn and Ron at 11:51 PM