Ok, just so you know…we are neophytes in the apparently international standard of marina "mediterranean mooring", where the boat is stern-to the dock, without finger piers or pilings to tie off the bow. Instead, you use your anchor to secure the boat forward. We spent 20+ years in the Chesapeake and the east coast, with its nearly infinite number of anchorages and marinas, with nary a med-moor to be found. Med-mooring wasn’t even on our radar screen; we had blinkers on! Down here in the Leeward Islands though, it’s the norm (as it is in the Mediterranean and some places in the Pacific). Getting Equinox situated her first med-moor in Palapa Marina wasn’t too bad, as there weren’t any boats near us when we arrived. We dropped anchor, fed out our long 200'+ “mooring” line (cobbled together from many of our longer dock lines, I am embarrassed to admit) and angled back into our “slip” before securing the stern with 4 different stern and spring lines radiating from Equinox’s different hawsepipe horns. We didn't do too badly for the first time, I guess!

Throughout our week stay, we watched as much larger yachts and sailboats came and went: Be as You Are, Blind Date, Costa Brava, Sherakhan, and the beautiful sailing vessel, Zefiro, registered in Malta. Costa Brava’s anchor fouled on the huge mooring line anchor chain on their departure, and it was rather exciting to watch them extricate themselves. As for Zefiro, well, they had sailed directly south from Glouchester, MA, skirting sub-tropical storm/hurricane Sean --“the waves only got as high as the spreaders” -- (!!) so despite their experience and nonchalance, even they had difficulty coming in. First off, there was a shallow bar in the channel, which they found --- their 14’ draft was not going over the 11’ shoal!
Aground, they kedged themselves off with assistance, and then backed into their slip on our port, er….make that the starboard side!! 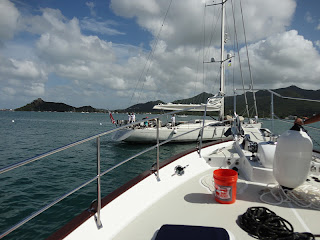 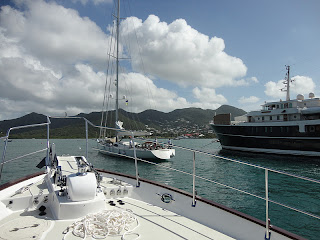 For us, our med-mooring challenges got even more exciting when the mega-yacht BelAbri slid in on our port side just minutes before our departure. Their large anchor and chain? Possibly dropped across our small anchor chain as they backed in. With the mooring lines of Zefiro to starboard, a mooring buoy dead ahead and our anchor possibly fouled, it looked to be an exciting exit from the marina! We were worried about our stabilizers snagging mooring lines or anchor chain…and how would we clear everything if we were fouled??
The answer? A pair of divers from the marina came up to us in their skiff (clearly well-versed with this unsettling scenario) and the diver then followed our anchor chain out and down, to mark its placement before we moved.
The diver ensured that we were not fouled by BelAbri -- we were clear by a few meters – and instructed us to haul our anchor straight up, without dragging it forward as we eased out, so as not to foul BelAbri’s chain. It was a tight fit!! Capt. Ron was his usual calm self: after we hauled in the mooring line, he manned the wing station while I ran back to release the stern lines then returned to the windlass to haul anchor. While I was a bit busy, Ron was serenely keeping us neatly between Zefiro and BelAbri as we exited without issue….it just was a tight fit, is all!