Ron and I went out diving today with Dougie (Douglas) Carty,  the owner and operator of “Special D” Diving & Charters, which is the dive operation here at Sandy Ground. A native Anguillan, Dougie has been diving all of his life, and has over 18 years of running a dive operation in Anguilla. Just last year, Dougie was instrumental in helping locate the wreck of the MV Hilda, a Dutch ship that was loaned out to the British Royal Navy during WWII. The Hilda assisted in the evacuation of soldiers from the beaches of Dunkirk in WWII, and helped in the recovery of survivors from other ships bombed during the naval operation. SO…an interesting twist of fate that a piece of European history is now a local dive site. It's a small world!
For our dive, Dougie took us out aboard his boat, Desha, to the reefs along the west side of Anguilla, where we first dove on a long, low-profile reef filled with healthy coral, and many fish, from the usual barracuda, grunts, tangs, angelfish, and parrotfish to a large queen triggerfish and porcupine pufferfish. We found a Hawksbill turtle happily munching on some sea grasses amidst the coral, too! From there, we swam across a sandy stretch to the dive on the wreck of the M/V OosterDiep. The 150' OosterDiep was purposely sunk in 1994 as part of an ecological program to develop artificial reefs from old vessels. Built in 1957 in the Netherlands, she drifted aground on a shoal at the southwest entrance of Road Bay, Anguilla and met her demise in 1990. She was stripped by a salvage company and made ready for deliberate sinking, and now lies northwest of Meads Bay in 75’ of water on a sandy bottom.
Well-preserved, the OosterDiep is covered with coral, sea fans, sponges and other growth, and home to a delightful array of fish. Gangs of barracuda hung out around the periphery of the boat, as turtles relaxed and rested in the pilothouse and on the stern portion. We came across a huge fish nestled into the shade of a jagged overhang of the wreck's port side – at first glance I thought it was a shark, it was that big -- but no, just a very large cobia which took off as we approached. Cool! Dougie said they’d seen the cobia on dives earlier in the year, but hadn’t seen it in some months. Nice that it’s back! Ron and I enjoyed the dive immensely…there were several large lobster inside various nooks and crannies, schools of blue chromis flowing past the gunnels, swarms of glassy sweepers inside the wreck, as well as a small moray eel up near the pilothouse. I also spotted a large trunkfish, shyly peeking out from the stern section of the ship. All in all, a lovely, relaxed dive! 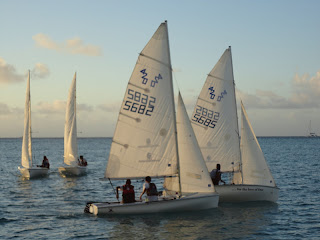 The remainder of the day was quiet; we walked along the beach, had quiet time reading on the aft deck and spent sunset watching the Anguilla Youth Sailing Club in action, as they were out racing in their little sailboats. The kids are extremely adept sailors; they would come racing along the boat (looking like they were going to totally broadside our dinghy, but then they’d tack and turn on a dime!) I’d heard the Anguillans love sailing -- it’s regarded as their national sport, I believe — so it was neat to see it in action. The kids were simply fun to watch...and it's just one more reason why I love cruising! We're so very lucky to be out here doing it!
Hugs to all, Karyn and Ron at 7:33 PM