One of the fun things about cruising is sampling the island’s local fare, and finding out if there are any island specialties. Sometimes, we'll get adventurous for ourselves and try to prepare them aboard, usually with some success. So, when we come across a fruit or a vegetable at the local market that we don’t recognize, we always ask what it is…and ask as many questions as we can about preparing it. I have an old Caribbean Cooking cookbook (copyright 1973!) which is a great resource, but we've found the best recipes by simply asking the person selling the vegetables!
Take, for instance, the yard-long green beans we found at the market. Also known as Chinese beans, the beans are pencil-thin, flexible pods that can grow as long as 3 feet. We found a couple shorter-length bunches of 18" or so, and bought them for our holiday meal. They are not as juicy and sweet as the regular green beans we’re familiar with in the States, but have a sharper, more pronounced flavor and are denser in texture. The recipe in the cookbook said to make them like Szechuan-style spicy green beans (yes, this was in a Caribbean cookbook - go figure!) but we had them simply steamed as an accompaniment to our turkey dinner, and we all agreed, they were quite good!

Another new item we discovered is the soursop fruit, which abound here in Antigua. It’s so popular that the juice is processed and sold here in the supermarkets. Soursop is very common in tropical climates, but most Americans aren’t that familiar with them as the trees can’t survive in most of the US -- it’s simply too cold. (According to Wikipedia, temperatures below 41 °F will cause damage to leaves and small branches, and temperatures below 37 °F can be "fatal". Ouch!) Soursop fruit are large, green ovals with short stubby spines; the thin outer skin is easily cut away to get to the juicy, cream-colored fruit inside. The fruit is used in many ways, from ice cream, sherbets and desserts to beverages throughout the Caribbean. Always willing to try something new, we gave soursop juice a try, and found it to be delicious! A pale, grapefruit color, it tastes rather like strawberry but more tangy and tart. (It’s a great mixer with either rum or vodka, by the way!)
Yesterday, after checking out the local market, we were walking along the streets and checking out the stalls of the  many street vendors and found one woman selling noni, a whitish, potato-sized bumpy fruit. I'd certainly never seen them before!! They are found on the noni tree, or the morinda citrifolia. (I had to Google "noni", as I wasn't even sure I'd heard the name of the fruit correctly, since the woman had a thick West Indian accent.) and apparently have a very, um...distinctive smell. Its odor is so unpleasant that it's nicknamed the “cheese fruit” or (even worse) “the vomit fruit”. Really! Thankfully, I couldn't smell them (I'm not sure Ron got close enough to them to do so) but the woman was most insistent that they were quite healthy for you, being the “aspirin” plant, having all sorts of uses, from curing headaches to being an aphrodisiac, to easing arthritis, cuts, bruises and even gout, among others. We passed on the noni, nevertheless. 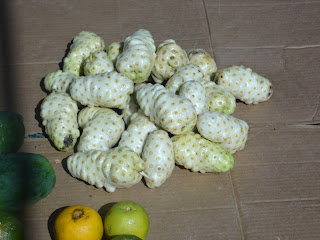 Upon later investigation, we discovered that you have to ferment the fruit first before getting any juice. You place the fruit in a glass jar and let it sit for a week to a month (or more!) in the sun, and then extract the juice. A lot of folk mix its juice with honey or other fruit juices to make it more palatable, since it’s fairly nasty tasting. Knowing that its smell and taste are unpleasant, I am so glad we don't have it fermenting aboard the boat!

In any case, whether they are foreign fruits or ... forbidden fruits, it's your choice when out cruising! Enjoy!
Hugs to all, Karyn and Ron at 12:57 PM