Back in Florida, back to the daily grind of coordinating boat projects! Wednesday was a full-speed day as we had Martek aboard in the morning and then again in the afternoon, working on the Sirius unit and the SSB. We sea-trialed the boat mid-morning with Darryl of American Bow Thruster/Trac, to check out the hydraulics system pressure, as the starboard engine pump pressure has been oscillating a bit. Darryl adjusted the pressure, and inspected the rest of the system, reporting that the actuator arms are both in great shape. We may upgrade the system a bit later this summer, when we haul out for a bit in August and September.


Unfortunately, the Nitrox compressor remains in limbo; although Coltri Americas finally came up from Coral Springs to diagnose and repair it, they still don't know what is wrong with it. We've not gotten a lot of use out of it -- maybe 30 hours -- but apparently the low pressure compressor side of the system is the culprit. Unfortunately, in order to take it out and bench test it, the high pressure compressor will have to be removed first, since the low pressure unit is behind it. UGH! So...no results yet. There will be more investigation into the low pressure compressor next week, and we'll see how things fare then...
We also have had work continuing on the gensets: the leaky water pump on the 12 kW has been replaced, and we had the exhaust elbow upgraded to stainless steel. We did the same to the 20 kW, so all is good there. Unfortunately, with the 20kW, it seems like getting one thing resolved leads to another issue! For instance, the engine mounts for the 20 kW also support the clutched pump/PTO for the hydraulics that run the windlass and bow thruster. Unfortunately, one of those mounts is in such a place as to prevent the removal of the raw water pump (or you have to disassemble the entire thing, simply trying to get the water pump off!). Upon closer inspection, our mechanic discovered that one of the mounts itself had a hairline crack, so that needed to be replaced as well, to prevent a catastrophic break down if the the mount failed. The faulty mount was replaced with Northern Light's "upgraded" version of the original yesterday, so progress is being made on that front.
We also replaced the defunct battery monitoring system with a unit that actually works! We now have a Victron Battery Monitoring system so that we can keep track of the house battery usage and charging status. The former unit was supposed to keep track of both the house battery bank and the nav/com batteries, but in conjunction with our inverter and battery equalizer, only one side of the system worked, and even then, it would lock up at times. Hopefully, this new system will work more efficiently and provide us with the information we'd like.
The remaining issue is with the alternators, as the center-fielder apparently isn't doing its job to synchronize their outputs. One alternator becomes the dominant regulator, depending on which engine you start first vs. second, even though the center-fielder says they're in synch So, back to Balmar with that question...always, another issue!
But, we're not all work and no play! We've been relieving the boat repair monotony with a lot of bicycling each morning. The weather has been unseasonably hot -- we've been told this is August/September weather, not June weather, so we've been riding in the mornings when the temperatures are cooler. Yesterday Ron and I did over 30 miles, and this morning, another 16. We're really enjoying the biking here, as the scenery along the Indian River or on the barrier island along the Atlantic is just gorgeous. Between the sun sparkling on the water, the diverse types of palm trees, the banyan trees and birds, there's always a view! 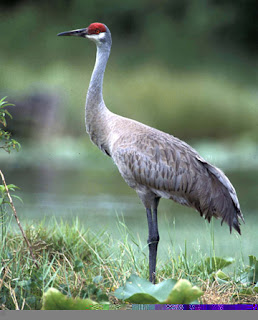 The red cap on a sandhill crane

We passed a beautiful pair of sandhill cranes feeding this morning as we rode along the Savannas Preserve State Park, one of our favorite areas. Stretching more than 10 miles from Ft. Pierce to Jensen Beach, this preserve is one of the largest and most intact remnant of Florida's east coast freshwater marshes, or "savannas". It's a beautiful ride! We also saw the usual herons feeding along the Indian River, and white ibis along the marshes -- always pretty, and I never tire of seeing them.
Ally is now home for the summer, after a couple days at the beach in Ocean City, MD with her OS girlfriends. She's been busy unpacking all the boxes that she shipped down from school, and is now focused on getting a job. Today she's working for a friend with a boat detailing business, but is anxious to get a true full-time job. While it's not the easiest time to find work, Ally is definitely persistent, so we have no doubt she will find something!
Hugs to all, Karyn and Ron at 2:15 PM