Gearing up and wrapping up...

...the work projects aboard both Equinox and Tingum, at long last! Tingum is now back in the water after getting the numerous little punch list items repaired, from small things like stripped screws to the larger items like scheduled 100-hour engine service, to getting a new dive ladder installed on the starboard stern to getting a new autopilot installed. We had the bottom painted, the entire boat detailed and waxed...and Tingum is now sporting her name on either side of the boat! With the new upgraded speakers and sub-woofer on the stereo system, she is sounding and looking sharp! 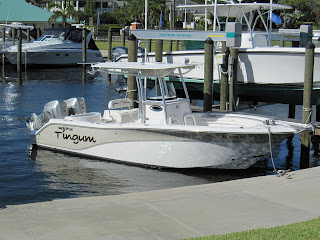 As for Equinox, we had a punch list a mile long after the months spent aboard in the Bahamas, and have gotten extensive work accomplished! Most important was the work done on both generators, inspecting, repairing and replacing needed items. From installing new stainless steel exhaust risers to replacing the leaky (12 kW) and almost-leaky (20 kW) raw water pumps, a lot of work was accomplished and both sets are now purring along beautifully. We had the tender davit system inspected and oiled, the hydraulics system checked and pressure adjusted, the flybridge grill cover replaced and the entire thing cleaned beautifully, the boat cleaned inside and out, detailed and waxed. We had Dick Murray, our water-maker guru, return today with a brand-new Clark pump to replace the old replacement pump (the previous one was refurbished, not new as we expected) and he now has the system making water to factory specifications. Ron's diligence and persistence in coordinating all these projects gets major kudos!!

Lots of other items got attention too, although some are still works in progress, including the Nitrox compressor, which still has an issue with the low-pressure side of the system. We'll get that addressed in August when we're hauled out for a bit, but until then, we'll make do with diving air, not enriched air. Ron also had Martek at work, from replacing the Sirius radio receiver power transducer to moving the auto-pilot remote plug-in to a better spot in the pilothouse to tracking down the sources of interference on the SSB (believe it or not, the back-lighting illumination strips on each of the breaker panels were a major source). It was a frustrating process, since electrical gremlins are the hardest to ferret out!

We're also keeping a wary eye on the alternators on the main engines, as the centerfielder apparently wasn't able to do its job properly since the wire runs to each engine were of different lengths, causing one alternator to dominate and run hot. The wire runs have since been changed to equal lengths, so we shall see how the system now performs. Seems like as soon as we fixed or improved one item, another issue would present itself. Enough with finding more issues!!
To add more fun in our lives, getting work done on the boat is not the only issue. We've had no dryer at the condo for the past couple of weeks, (the interface board circuitry died, apparently) so I've been lugging the laundry to the boat to get it done there. It's not any fault of our maintenance guy here, as he's been great in getting the service calls set up. But...we've had the dryer guy here three times already, to no avail, and this last time, he wasn't able to do anything since he'd ordered the wrong replacement part!! ARGH!! Getting work done on the boat was easier, I think! :)


We've been relieving the stress from all the boat work and dryer frustrations by bicycling in the mornings before it gets too hot. Ally has been using my bike (as we're nearly the same height) and she's enjoying it immensely. She's a natural at it, actually, and she and Ron have been doing 10-15 miles each time they go out. We've been able to do other things together as a family too; today we took Tingum for a family outing to Manatee Pocket for a late lunch/early dinner at Finz, happily being together on the water. It was a nice change of pace, and we all enjoyed watching the pelicans diving for their dinner, and sharing the ICW with dolphins and manatees on the way home. 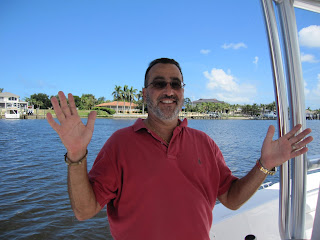 Look, no hands...the autopilot is at work! 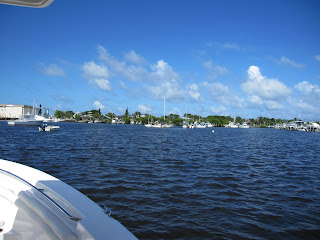 A sunny and breezy day as we headed home from Manatee Pocket
Hugs to all, Karyn and Ron at 7:20 PM