Diving & Message in a Bottle! 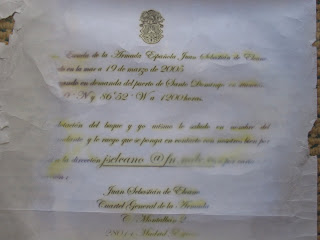 Yesterday we all went out in the dinghy to explor e the east side of Green Turtle and do some diving. It was still pretty rough, with good 4' swells, so after looking for some promising reef areas (and failing) we went back towards shore and tied off on a mooring buoy near a shallow dive site called Sea Gardens. Ally worked on her tan while Taylor, Ron and I dove the site, to check out how Tay was underwater and to refresh her skills since her last dives earlier in June. Tay was relaxed and comfortable; as Ron said, "Taylor, you're a natural!"

After the dive, we decided to explore the gorgeous white sand beach of the south tip of Green Turtle Cay, and lo and behold, in the seaweed at the high tide line, Ron found a green bottle, corked, with a rolled scroll of paper in it!! A message in a bottle!!

We took it back to the marina with us, and took part in a great cruisers' potluck lunch behind Brendal's Dive Shop. Later, back aboard, Ron scored the bottle with a file and cracked it open. It startled us a bit, because it was in Spanish! Which made it even more cool! Unfortunately, some of the message was washed away, as there had been moisture inside the bottle, but what we could read was as follows:
"...Escuela de la Armada Espanola Juan Sebastien de Elcano
...en la mar da 19 de marzo de 2005
...-ando en demanda del puerto Santo Domingo en situacion
... - 50' N y 86 52' W a 1200 hours
There was more, including a partially legible e-mail address, but also the general address of the Juan Sebastien de Elcano tall ship in Madrid Spain! We did some checking of the coordinates, and figure that the tall sailing ship must have put the message in the bottle into the sea somewhere in Honduras, judging from the latitude coordinate, although we couldn't find any references to a Santo Domingo near that coordinate. Still, very cool!! What we love the best is that Equinox and the Juan Sebastien de Elcano have crossed paths before as the tall ship was in Baltimore last summer! We took photos of the ship as she was in the harbor, with all her sailors in the rigging. Here's a photo I took last summer as she was leaving Baltimore: 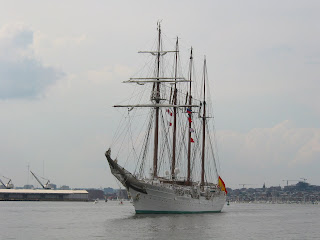