Thanksgiving in the Bahamas

Ally and I arrived in West End, Grand Bahama the Friday before Thanksgiving, and took a cab to Old Bahama Bay Marina. Equinox had arrived in port the evening before, and cleared customs that morning. Ron, Ally and I were just happy to be together again, and Kerry and Karen enjoyed being on dry (albeit windy) land after the long trip down. Merry celebrations followed....!

Unfortunately, the conditions were rough and tumble offshore so we opted to stay near Old Bahama Bay. We went out each day aboard our tender, Eclipse, staying near West End to lobster, conch and dive. Ron spent a day with Melvin, one of the local conch divers, and learned the Bahamian techniques to finding and cleaning conch, as well as where to find lobster. Melvin made conch salad for us on the back deck, and we had lobster omelets the following morning.

As luck would have it, we met some kindred souls aboard Miles Aweigh, Bill and Dede Miles and their daughters Shelly and Casey. They had crossed from FL for the holiday, and wound up berthed in the slip next to ours. We totally hit it off, from the girls love of diving and sunning to our mutual dream of cruising and living aboard. We joined forces for a fabulous Thanksgiving feast, sharing traditions such as triple-baked southern cornbread stuffing to mashed swe 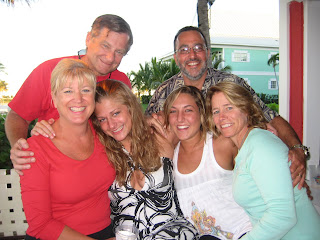 et potatoes with pineapple to barley-mushroom risotto. It was a fantastic evening: good food, fine wine, new friends and new traditions! Never knew there were such things as chocolate turkeys!
Hugs to all, Karyn and Ron at 5:28 PM