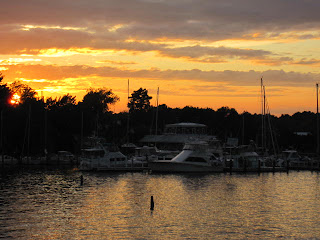 Our stay in St. Michaels was delightful....albeit just a day or two. We stayed on anchor Thursday night under somewhat increasingly gray and blustery skies, and much to our dismay, realized we'd underestimated the Water Taxi runs here. They only run in the evenings or on the weekends, so our anticipated bicycle ride Friday morning didn't materialize since we had no way to get to shore! We are really missing our dinghy!! On the bright side, we're getting a lot of small projects done on the boat, since we are captive audiences to them! I shortened a pair fender lines and whipped all four of the loose ends neatly, as well as repaired the soft-sided dinghy cooler. The zipper corroded in the salt air, disintegrated and fell off so there was no way to close the insulated top on it. So, rather than throw it out, I thought I'd at least try to make the igloo cooler useful again by sewing velcro straps on the front, so we can keep the top closed. Funny how the small things make you feel so productive!
Late Friday morning, Ron called the Harbor Inn at St. Michaels and found they had a no-show, and that there was a slip available to us. SO...spur of the moment, we took it, and had the afternoon and evening in town. We hit Bleachers (our favorite store! Thank you, Wells!) and the Acme for groceries before a late lunch at Foxy's Marina Bar. We also hit the Harbor Inn's pool and hot tub, which was delightful...the pool was ice cold and the hot tub was hot. SO...all in all, rather nice! Plus, the sunset was glorious and we enjoyed it from the flybridge. Again, it's the little things...! 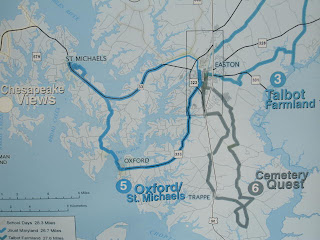 Crisp and clear, with no wind...that was Saturday morning. We were up early for a bike ride: out Rt. 33 from St. Michael's through the woods and fields towards Easton, then over the creek to Oxford, and a ride on the Oxford-Bellevue Ferry. We had the ferry to ourselves on the way across; it was the second run of the morning from Oxford, as we'd just missed the first run -- as we bicycled to the ramp, the ferry was halfway across. 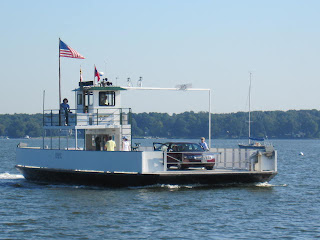 The Oxford-Bellevue Ferry
Once off the ferry, we finished the route with a pretty spin through Royal Oaks then back to St. Michael's - a good 30 mile ride. A quick soak in the hot tub after our ride, and then since there was now literally, no room at the Inn, we headed out. With Ally meeting us that afternoon, we decided to head over to Annapolis to shorten her commute.
It was a ZOO out on the Bay...everybody and their brother was out on the Bay in their boats, big and small, sail or power, slow trawlers or go-fast boats. There was so much traffic on the radio the squelch function was useless, so it was hissing and squawking all the way. Plus, no one was very polite with one another: folks on the radio yelling about who has right of way, and watching one's wake ...! UGH! So, despite it all, we made our way across the Bay amongst the crowds, and once in front of the Naval Academy in Annapolis, on the spur of the moment, called Yacht Basin to see if they had any slips available. The anchorage was crowded, and looking none too promising, but then...wonders will never cease, as Yacht Basin had room! We indulged yet again, and it worked out well with Ally driving down to be with us for the evening.
We haven't seen Ally all week, with her boarding M-F. While it was her idea to be a boarder, it's been a rough adjustment for her, unfortunately. Cell phone service is non-existent, so she's feeling cut off from her friends (and us) plus she's feeling the pressure of senior year: tough classes, lots of college applications to finish, and little internet access beyond what's available at the school library to get it all done. There were some tears, but hopefully time will help and once classes and routines become familiar, things will get easier.
Hugs to all, Karyn and Ron at 8:39 PM