Ron and I have spent a couple of days here at Manchioneel Bay, Cooper Island, one of our favorite spots in the BVI. The last time we were here, there was only a small dive shop and an even  smaller beach bar on a cement patio. Now, there is a tiny but gorgeous eco-friendly resort, adjacent to the still-existing and now expanded dive shop, with a fabulous beach lounge area, covered open-air restaurant and bar, cute boutique gift shop and well-kept bungalows. It’s very cool! Built in 2009 from recycled teak and other natural materials, Cooper Island Beach Club gets up to 70% of its energy needs from solar panels, its water from rooftop rainwater collection systems and cisterns, and has rooftop solar water heaters to provide hot water. It operates on a very green-conscious basis, all of which is done with great taste. Even their brightly colored bar stools are made from recycled teak from old West Indian fishing boats! 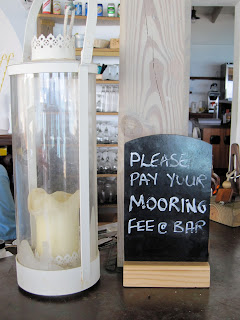 The diving here off Cooper Island is great, too. There are several dive sites off Cooper, some on the Atlantic side of things and exposed to the easterly sea state, others in between the two islands of Cooper and Salt. The wreck of the RMS Rhone, a 310' Royal Mail ship that was sunk in a hurricane in 1867, rests on the west side of Salt Island, but conditions in the Drake were so sloppy that taking the dinghy around to dive there wasn’t appealing to us. Instead, we opted for sites closer to Cooper’s lee shore, and revisited the dive site named “Thumb Rock”, named for the large boulder on the shore that stands out like a sore thumb on Red Bluff Point, Cooper Island. Besides the large boulder fields along the shoreline, there is lush spur and groove coral topography, and the reef life was teeming. Despite the somewhat low visibility due to the churned up seas, we found two absolutely huge Matriarch-of-the-Sea-sized female lobsters hiding in the reef...one was not the least bit fearful, and came out to challenge us, trying to scare us away with her long spiky antenna. The other lobster we found merely glowered at us from her tucked away hiding hole but each of them were formidable!
We also thoroughly enjoyed new-to-us sites of Wreck Ally and the Inganess Bay. Wreck Alley is a grouping of four different boats intentionally sunk as dive sites along the southwestern point of Cooper Island in 85' of water. The eldest boat, the Marie L, a 90’ cargo boat, was sunk in 1991, and four years later, another 90’ inter-island trader named the Pat was intentionally sunk “nearby” -- but it actually hit the Marie L on the way down and the two boats ended up nestling together, with the Pat coming to rest against the Marie L’s hull.. Now they look as if they are passing port-to-port in perpetuity...graceful yet rather eerie, underwater!
The other two wrecks, the Beata and the Island Seal/Joey D were sunk a few years later, and that pair sits sit just a hundred yards to the north. All are filled with fabulous reef life: good sized snapper, sergeant-majors, blue tangs, wrasses, hinds, french grunts, angel fish, parrotfish of all sizes and colors, encrusted with soft corals and rope sponges. There was a huge bushy black coral growing from the ceiling of the pilot house of the Pat that looked like a chandelier hanging down. A very cool dive indeed! At 85’ in depth, we couldn’t spend as much time as we’d have liked to fully explore all four wrecks, but we will definitely dive this again sometime in the future.


We also dove the wreck of the Inganess Bay, a 136' inter-island trader that grounded in Road Harbour during hurricane Bertha in July 1996. It was sunk in August of the same year, and while initially intact, it is now in two sections, due to recent storms. There aren't that many reef fish here, as the wreck is sitting in a large sandy area away from the reefs around the island, but I did see a large black grouper that ducked inside the wreck on our descent. Unfortunately, Ron and I also saw our first BVI lionfish, a small juvenile, inside the westernmost section of the wreck. We swam around the anchor windlass and foremast on the bow, and checked out the main hull with its many places to peek inside. While not as riveting as Wreck Alley, this is still a decent dive. We enjoyed it!
Hugs to all, Karyn and Ron at 11:54 PM