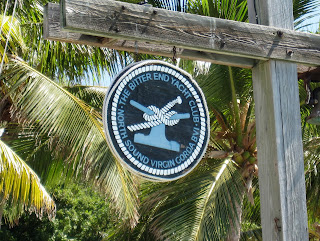 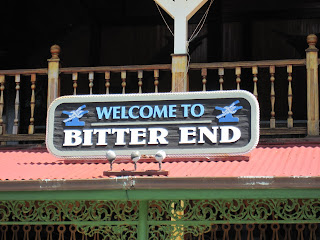 Yesterday we cruised up to Gorda Sound, anchoring off Prickly Pear Island near Virgin Gorda’s north end. Gorda Sound is a fabled stop for yachtsmen over forty years, being home of the Bitter End Yacht Club. According to Street's Cruising Guide to the Eastern Caribbean, the Bitter End was founded in the 1970s by a gentleman named Basil Symonette, when there was nothing but bush on the end of the island. He and some friends hacked away the brush and built a small guest house that they dubbed "The Last Resort" --  in regards to its remote location. It grew into a well-regarded sailing-oriented operation from its humble beginnings, and eventually, Basil sold the Bitter End Yacht Club to the Hokin family, who still own and operate the now-greatly expanded, bustling resort. The glow of its original charm seems a bit lost amidst the the plastic signs for the various restaurants and retail centers, children’s camp programs, boat rentals, sailing school, windsurfing and other watersports. BEYC is now a nautical "Grand Central Station", and caters to family vacations, weddings and honeymooners, not just visiting yachts and vacationing boaters. 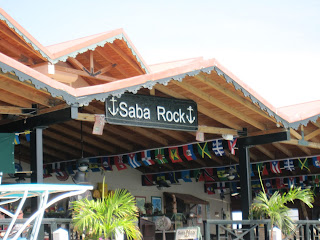 There are a number of other establishments around Gorda Sound, like Leverick Bay Marina, Biras Creek Resort and Saba Rock, the smallest inhabited cay in the BVIs. We dinghied over to Saba Rock Resort and had a great lunch there on Friday. Just under one acre  at low tide, Saba Rock is a hotel, restaurant & bar, as well as a full service marina. They have an impressive collection of antique outboard motors and other nautical memorabilia there, adding to the unique ambiance. Fun indeed -- check these out: 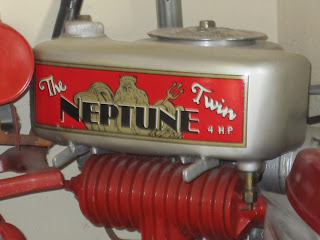 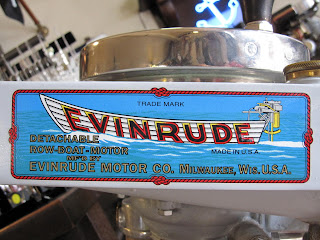 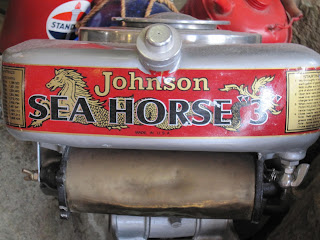 So, we've enjoyed our time here! To add to the camaraderie, we crossed paths yet again with Tom and Judy off Long Reach, whom we met while in the Turks and Caicos. We dined aboard their lovely catamaran one evening, and then reciprocated as well on Saturday night. It was a great time trading stories and experiences, and we hope to catch up with them again sometime! Cruising is a small world indeed, for you never know whom you will see again and again!
And, speaking of crossing paths, when we moved anchorages, we also had the fun serendipity of crossing paths with Chanticleer again! She was on anchor just ahead of us  when we dropped anchor near Biras Creek. Chanticleer is the boat previously owned by Frances Langford, who was known as the "Sweetheart of World War II. (Her trademark song, "I´m in the Mood for Love" captivated soldiers during the 1940s, and she traveled the world with the USO Bob Hope Shows during the WWII.) We've encountered Chanticleer several times before, first in the Chesapeake at St. Michaels, where we helped her captain clear their props after they got fouled with their tender line as they were docking, and then again in the Bahamas, when we both were on anchor at Great Sale Cay on the way to the Abacos.

And...the connection has grown, since our current home port and marina, Outrigger Harbour, was part of Langford's former estate! Frances Langford married Ralph Evinrude in 1955, (his family made the famous Evinrude outboard motors) and Langford began accumulating property along the Indian River in Jenson Beach, Florida. Among the 400 acres was a small marina, where Langford kept Chanticleer during the winter months. Adjacent to the marina, they opened the Outrigger Resort in the mid-1950s, where Langford frequently performed. Nowadays, The Outrigger Resort is known as The Dolphin Bar, and their marina? Outrigger Harbour, our small but lovely condo and marina community! How neat to see Chanticleer yet again!
Hugs to all, Karyn and Ron at 2:32 AM