For dinner last night, we went back up and over the mountain to the lovely seaside town of Grand Case, considered by many to be the gastronomic center of St. Martin. Lovely! We had a great time wandering the waterfront street, checking out the posted menus and the chalkboards at each establishment. We ended up eating at Le Pressoir, a charming 1871 West Indies house converted into a restaurant, named for the huge salt press from the Grand Case Salt Pond, which was used to crush sea salt crystals for packing, export and sale in Europe back in the 1800s. The actual salt press is on display across the street from the restaurant. Very cool!
There was French and Creole cuisine on the menu, of course -- from escargot, ("crispy snails" on the English translation side), grilled frogs’ legs, foie gras ("La terrine de foie gras aromatisee au rhum jumbie" in the French version) to a duo de filets poissons -- the night’s special was John Dory and Artic Char, which I had. All sounded so good, and believe me, it tasted even better!. This is not the cruisers’ diet plan, let me tell you, but it was a great night!
Today, we spent the day cruising about the island by car; running to Budget Marine again, and then over to Oyster Pond to see the sights. While in Oyster Pond, we pulled in at the marina and stopped at the dive shop there, The Scuba Shop, for a few items. We’d heard that the dive shops here on St.Martin have a free booklet of dive sites that are suitable for diving from your own boat or dinghy, so we wanted to get a copy. Peter at The Scuba Shop was very helpful, and explained that the booklet is really aimed at the charter fleet crowd. While most of the dives listed were fairly basic  sites for both snorkelers and divers, they did list several scuba sites around Ile Fourche and St. Bart’s that sound interesting! We’ll definitely have to get a dive permit in Gustavia whenever we move Equinox to St. Bart’s! Since the Scuba Shop is also an authorized dealer for several different regulator manufacturers, we checked out their gear and had a nice time window shopping!
After our forays around the island, we decided we’d check out some of the beaches on the island. While we would have liked to spend some time on Maho Beach, it was on the opposite end of the island. Maho Beach is best known for the fact that it’s located at the western end of the runway at Princess Juliana International Airport, and approaching planes land right overhead, touching down about 40-100 yards behind the beach. Apparently, when the big 747s take off, you practically get blasted off the beach! But, Maho Beach wasn't in the cards, so we meandered our way north from Oyster Pond through some goregous rural countryside. 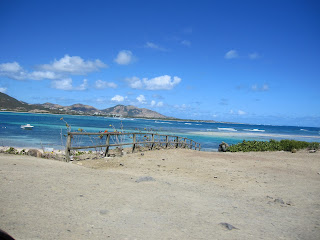 However, there was a beautiful beach on the way back north along Orient Bay, or in French, “Baie Orientale”, so we decided to check that out. We’d heard that the bay was was one of the most popular, with lots of water sports and with five different beaches along the bay. The beaches here are really majestic, with the mountains rising up all around behind the 2 mile-long sweep of white sand. In Orient Bay, there are tiny islands just offshore, including Green Key, Tintamarre and Pinel Island, with the area being a marine reserve with good snorkeling. All gorgeous!
However, after we parked and walked out onto the the southern end of the beach, we also discovered another reason why Orient Bay is so popular, since it is one of the island’s public “clothing optional” beaches! After a fun lunch at Andy and Cheryl's Baywatch Cafe, we walked down the beach. While we encountered a few nude sunbathers all along the beach, the majority are at the southern end, where the famous Club Orient is located. It turns out that “Club O”  -- their motto: “Nothing is better!” -- is the island’s premier naturist resort, including a full-service restaurant and bar on the public beach. Folks along the beach were very low-key and laid-back, whether they were in swimsuits or without. And, when in Rome...do as the Romans! (Or, rather, the French!) We had a great time; we found a pair of lounge chairs for the afternoon, and had a relaxing time reading, napping and swimming in the sunshine. One thing we noticed as the folks went past, while clothing might be optional, sunscreen is not!
Hugs to all, Karyn and Ron at 11:31 PM