We cruised from Jost Van Dyke over to the Bight at Norman Island, where we anchored along the northern side of the lovely cove. There were many moorings there, and initially, they were  mostly empty, but as the day went on, they filled to capacity. We dinghied ashore at the Pirate’s Bight, and enjoyed a fun lunchtime meal of mahi-mahi sandwiches by its beautiful beach. 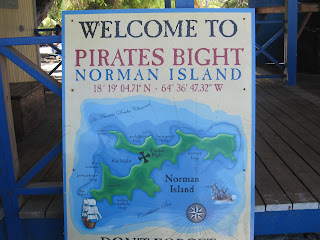 Ron and I then took Karen and Kerry over to the Caves at Treasure Point, where we snorkeled for a good hour or more along the shoreline, enjoying the reef life along the craggy hills. The three caves themselves were fun to explore, each only partially filled with water so the dry areas above the water level shimmer with the reflected light. Below the waterline, there are schools of glassy sweeps and tiny silversides swirling about. The soft corals and sponges are vibrant and colorful, and outside the caves, the schools of sergeant-majors and yellow-tail snapper were everywhere.  It was a good day!
Afterwards, Ron and I did a scuba-dive off a mooring out by the Pelicans. It’s a pretty area, although we  basically did a reef clean-up dive, picking up lost items/trash we found draping the reef and littering the sand as we went along. The trash total: 4 snorkels, 1 dive mask with broken strap, 2 fins (not a matching pair), 1 rash-guard, 1 wash-cloth, and 1 weight belt with about 25 pounds of lead! Ron could barely stay buoyant with the extra weight, he was practically pinned to the bottom! But...we figured it was better for the reef environment to remove what trash we found, even though it was a bit cumbersome to be swimming with our hands full. We also came across a small spotted moray tucked under a coral head, and the reef was home to a very large lobster as well, who came right out and tried its best to look menacing, waving its antennae around. A good dive!
The next dive was much better, the next day when we moved to a new anchorage in Great Harbor on Peter Island. Ron and I took the dinghy out and dove on the wreck of the Fearless, a 110’ minesweeper that was scuttled intentionally. The vessel sits upright in about 80’, listing to port, with her mast and shrouds towering over the pilothouse and lower decks below. The visibility around Peter Island isn’t that great as a general rule, so the dim light filtering through the silty water only added to the ghostly aura of the shipwreck. It’s a beautiful dive though; the wreck is intricately encrusted with all sorts of lacy hard and soft corals, purple rope sponges, and clouds of bushy, wispy coral with small, almost-translucent juveniles stationary inside them. There were small schools of snapper and other varied reef fish inside  but the main attraction here is the wreck itself. The scattered remains of the wreck of the original Willy T were off to the south, but we never found them, as we explored the reef near the mooring pin before finally ascending. Again, another fun dive and a good day! Looking forward to what tomorrow will bring!