Enough of being troubled by troubles, Ron and I had a productive and fun day! In the morning, we played around with our stern anchor. During our travels we've found that there are many island anchorages that have swells which cause Equinox to roll (sometimes uncomfortably so) while on anchor. Equinox, being a Kadey-Krogen, has a   well-designed hull with end-to-end symmetry and a "wineglass" transom, which gives it a fabulous ride in following seas. But, it also is very round, so in a swelly anchorage --- we roll! (Thank goodness for our Trac stabilizers while underway!!) We've noticed other smaller boats using stern anchors before, but we never had one aboard Equinox. This summer though, we made sure to put an extra Fortress anchor aboard, along with 20' of heavy chain and 100' of rode to serve as a stern anchor.

Gallows Bay has a regular swell -- yachts get bounced and rolled even at the docks in the marina, so once on anchor in the rather crowded anchorage and mooring field,  we decided to play with our new stern anchor and see how it worked. The benefit of a stern anchor is that it keeps the boat facing into the swell, regardless of any current or changing direction of the wind. We were delighted with how well it worked! Using it also enabled us to keep the tender fendered off the port hip, rather than playing her painter off the stern. An extra bonus we've discovered is that it keeps us stern to the town, so we have a very picturesque view from the aft cockpit.
Mid-day we went ashore and explored. It's what we love about cruising, being able to see the different islands on a more intimate level, learning their history and enjoying their charm. The town of Christiansted is a true blend of Caribbean, European and American cultures, being the one-time capital of the Danish West Indies. From the landing of Christopher Columbus in 1493 at Salt Bay, through years of Spanish fighting with Caribs and Arawaks, to settlement by the English and the Dutch in the 1600s, a brief Spanish rule in 1650, to purchase by the French in 1665, St. Croix underwent many changes. Under French rule, over 90 plantations were built, with crops of tobacco, cotton, sugar cane and indigo. The island was eventually purchased from the French government in 1733 by the Danish West India and Guinea Company, whereafter it was opened to immigrants of all nationalities. From Spanish Sephardic Jews, French Hugenots to English, St. Croix became a diverse and wealthy island due to its many sugar plantations. The island prospered until the early 1800s, when the sugar beet became a much cheaper source of sugar in Europe. The impact of this new method of sugar manufacturing meant the demise of Caribbean plantation life. The Danes sold the island to the United States in 1917.

Christiansted today reflects its historically diverse population, and the town is filled with  homes and businesses of amazing architectural quality and historic interest -- centuries old, well-built and still in use today. It's a pretty town. The National Park Service has seven acres set aside as a National Trust, centered on the Christiansted waterfront/wharf area. Ron and I walked through several of the historic structures, including Fort Christiansvaern built in 1738, and the Steeple Building, an old Lutheran church dating from 1753. We also saw the Danish Custom House (1844), and the Scale House (1856). 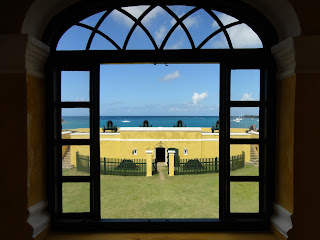 Fort Christiansværn or “Christian’s Defense”, is a Danish fort named in honor of King Christian IV of Denmark and Norway. Construction was finished around 1749 and was partially rebuilt in 1771 after hurricane damage, and is one of the best-preserved forts we've seen in the islands. The fort was originally for self-defense of the island's commerce against pirates and privateers, and none of the cannon were ever used in a battle. The Park's visitor center gives you a self-guided tour booklet which is very informative, so you are able to wander thoughout the fort as you wish. The small fort is very well-kept and fun to explore! It was a bit disturbing to see Equinox in the sights of the cannons, though, but thankfully, no shots were fired. That would have been one for the history books!