Well, during our lovely run down the Chesapeake in calm conditions, we kept checking the weather updates, and while the inshore forecast was good, the 48- & 96- hour forecasts for further offshore gave us pause when we saw the 3-meter markings on the forecast charts. NOAA forecasts are conservative in that the wind and wave forecasts indicate the average 1/3 of all the waves, meaning that a third of the waves will be larger than forecast. Who wants to see 12 waves? We’ve been there, and while Equinox can handle it, believe me, it is no fun for the crew.
So, we tucked into Norfolk for a night, arriving into Little Creek Va at 3:30 in the morning. We had a storm hot on our tail, complete with lightning and thunder as we pulled in the inlet. Ron had called ahead for a slip, and we were assigned A-58, right around the corner from the channel. Of course, not only was it the dead of night, but the outgoing current was clipping along at a good pace, and pushed the boat about quite a bit more than Ron was expecting, so we actually had to make two approaches to back into the slip. Between the wind, the current, the lightning, and the fatigue factor of a middle-of the night docking job, Ron did fabulously, in my opinion, easing us into the slip with nary a touch on the pilings!! I happily snagged the pilings with the lines, and once secure, we got shore power connected and hit the bed. Exhausted, but happy, we had time to wait for improving conditions.
Of course, the next day was glorious weather inshore, but we kept looking at the offshore wind and wave reports and telling ourselves we made the right decision. It’s so hard not to second guess yourself when it comes to the weather! We didn’t pout, but rather, put the dinghy in and enjoyed a champagne cruise on Little Creek. After a late afternoon nap, we briefly attended a Jimmy Buffett “Not-Quite-Live” concert that Paul from Parrot’s Nest was putting on at the other end of the pier (learning a lot about how to grill oysters and steam clams on the grill in the process). We had our leis and grass skirts; never go anywhere without them in the closet, actually!! I love having our clothes along when we come across an event like that. On our way back down the pier to the boat for beverage reinforcements, however, we stopped to talk with Maria and Jorgen Lindquist off Querincia, a Catalina 44 sailboat. Maria's Irish and Jorgen's Swedish, and after being invited aboard, we ended up chatting the night away with them, first aboard their boat, and then aboard Equinox. They are fun folks; they’re looking to spend the winter aboard in the Exumas, so we will be sure to look them up. We never did make it back for the concert, unfortunately! 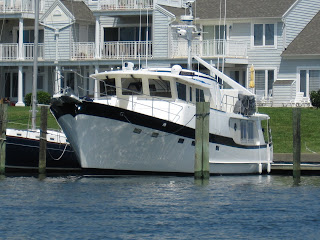 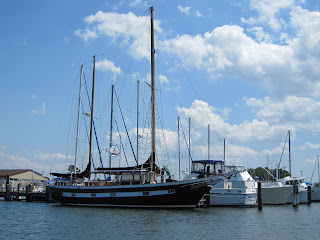 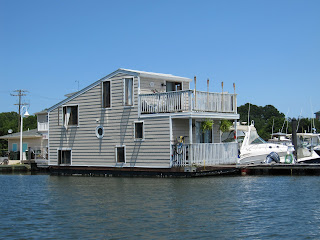 Some of the scenery from our dinghy cruise. Really like the classsic houseboat, listing to starboard....

The next morning, Ron was up before me, already checking the latest weather reports. Judging from what he saw, we now had a window of opportunity to head out. I looked at the charts with him, poured over the Bermuda weather forecasts and NOAA offshore predictions for wind and wave heights…and agreed. We topped off the fuel tanks and headed out of the Little Creek inlet around 1100. We called various folks with the float plan, and thus…here we are….just cruising along in lovely following seas of 1-2’, and a light wind behind us. There are some southeasterly swells to make it truly oceanic, but Equinox is just purring along and we are enjoying a fabulous first day at sea. It really doesn’t get much better than this….it’s a tad cloudy, but that’s okay. We had a light dinner of broiled tilapia, broccoli and tomato-cucumber-olive-avocado salad, and soon, we will start the night watches. Tonight I’m doing 8-12, Ron will do 12-4, and then I’ll be back at it again for the dawn watch. We used the satellite link to check the latest weather, and so far, this should continue throughout the night. We will encounter larger seas, but it looks like we timed this right! The ETA into Bermuda is on July 1st, about 10 in the morning. Can’t wait to see Allison again!! Miss HER!!

Ron’s putting out the fishing lines in hopes of catching some late dinner, AND…as I wrote that last sentence, he started hollering “FISH ON!! AND IT’S A BIG ONE!!” Certainly was!! Just as he was bringing in the line to give up, something hit it, and I slowed the boat, disengaging the stabilizers. He’d hooked a large yellowfin tuna, and was reeling it in hard. I grabbed my lone crabber’s glove (only have the left one, donated by a crabber on Fairlee Creek, who said he only needed the right one) and with the gaff in my other hand went out on the transom to wait for the fish to be close enough. I gaffed it once, but it got off and started taking off again, so Ron had to scramble to re-reel it in. (The fish almost took the rod with it, as Ron had set it down to help me, post-gaff.) The leader is way too long on that reel too, which made it difficult to deal with the overhang on the back deck, so we couldn’t get the line any closer than what the leader would allow. Finally, using the waves and the fish’s own motion, it came close enough to the surface for me to grab the line with my left (gloved) hand and gaff it with my right and bring it through the transom door. HUGE!! Approximately 45 inches long, we couldn’t lift it alone; both us of had to heave it into the cooler together. It had to weigh over 60 lbs, and that’s not an exaggeration. My hurried photo doesn’t do it justice, but that cooler is 40 inches long, and the you can see the tail curling up at the end of the cooler. 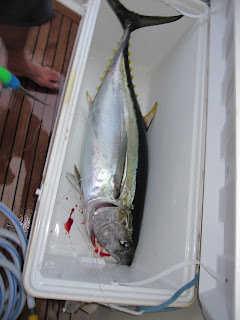 We set about pithing and bleeding it as it says to do in the books, although I’m not sure we did it quite right, but we tried. We added ice to cool it down as soon as we could and set about to gill and gut it. Ron then began the arduous job of cleaning and steaking it. Judging from the amount of tuna steaks we bagged and froze, along with a couple bags of chunks for seafood chowder, it definitely was sizable!! It took us over two hours from the time Ron hooked it to the time I finished vacuum-sealing the last bag of tuna steaks for the freezer. Oh yes, I’m SO glad I bought all those tuna steaks from Wegman’s before we set out!
Hugs to all, Karyn and Ron at 8:05 AM