Well, no fishing today, for it’s “one hand for the boat, one hand for yourself”. (Not that Ron didn’t try to put out the lines this morning as I was coming off watch, but I told him I needed to sleep and not have him shouting for help in landing another monster tuna.) In these conditions, you have to hang on, as we’re rocking through 6’ seas which are hitting us on the starboard beam. Every once in a while we get rolled to 15 or 30 degrees when a cluster of sneaky waves tosses us off balance, but it really isn’t too bad. If you get focused on the waves approaching, you just feel tense and overwhelmed by the power of the ocean, and fail to notice that Equinox is solidly plugging along through the waves. One just has to relax and accept the rhythm of the boat; then it’s actually comfortable. And after hours of watching an empty horizon and blank radar, just when you think no one else is out here, the 600’ cruise ship Norwegian Majesty comes flying past at 19 knots, clearly headed to Bermuda as well. Can’t say she looked any happier in the conditions, spraying and splashing her way about as she passed us. I thought about hailing her captain to slow down so we could follow in her lee….

Ron is off watch and attempting to sleep in our cabin while I’m at the helm. I’m on the 2000-2400 watch, and he’ll take the wee hours. It’s still quite light out, although once darkness descends, I’ll switch everything over to night mode and use red light so that my night vision doesn’t suffer. Not that I’ll need to see anything besides the radar and chartplotter. Can’t see anything out there now, but earlier, we were visited by a big pod of spotted dolphins. They were wheeling and cavorting in the waves alongside our bow, but the minute Ron tried to step outside to get a closer look, they left. SO…it’s been a quiet day of reading, standing watch, writing, or in Ron’s case, watching DVDs on his computer. We spoke with Ally earlier today via sat phone; she’s having a great time with Alexis McHarg (a girlfriend from school, who lives in Bermuda) and is looking forward to our arrival. The chart plotter is estimating a July 1st landfall; hard to believe we have two more days to go! Conditions aren’t going to get drastically better, but they aren’t forecast to get worse, either. Let’s hope it holds true!!
Well, forecast or not, there’s a squall approaching from the southwest, and although it’s soon to be overhead, it’s not raining yet. Guess that’s what the “isolated showers” means in the forecast. Just now, I heard Bermuda Harbor Radio responding to some sailboat that’s hailed its arrival. BHR cleared them to enter St. George’s harbor through Town Cut. Boy, does that make it real!! We’re still quite some distance away, over 344 nm!! Clearly Bermuda Radio has a hell of a VHF transmitter. Darkness is almost here; time to switch off the computer and switch the lights to red. My contemplation time! 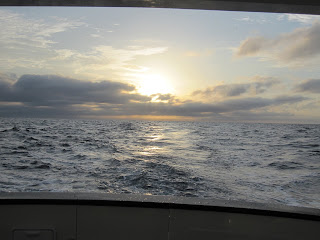