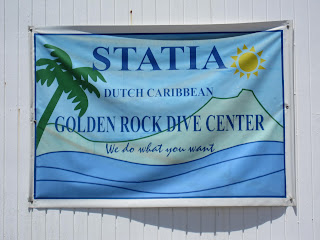 This morning we went out with Glenn, one of the owner of Golden Rock Divers, and enjoyed two really nice scuba dives. The first dive was at the Charles L. Brown, a 300’ former AT&T cable-laying ship that was purposefully sunk as a reef in 2003. Built in 1954, the Charles Brown was responsible for laying some of the first trans-Atlantic cables and travelled internationally for all sorts of cable laying operations. After it was retired, it was purchased by the government of St. Eustatius for a symbolic $1 for use as an artificial reef.


Glenn was one of the divers who worked with the Statia government on a committee to coordinate the task, helping to strip it down in preparation for safely sinking it. Items were removed for donation or use in schools and other community organizations, and the ship was cleaned of all oils and fuels, hazardous waste. Doors and other objects were taken off to make it safer for diving. (Glenn was actually the last person aboard before it was sunk.) Now, the ship sits at 85 feet, canted to starboard, and is a very cool dive site. We descended along the mooring line and were able to penetrate the wreck in portions; your flashlight illuminates the huge cargo bays where the spools of fiber-optic cable were held and as we finned past, I could see there are still miles of cable and lines aboard to this day. Outside the wreck, immense schools of horse-eye jack swirl around above and a large barracuda named Charlie hangs out alongside the aft end of the wreck.
The second dive was on an old underwater lava flow off the south end of the island, called Hangover Reef. It’s named for all the overhangs and ledges formed by the ancient lava flows…unusual dive profile and fun to explore. It was a great dive site, where we found everything from a tiny juvenile flounder to a bat-wing crab, a good-sized reef shark, a small spotted moray and a doe-eyed, colorful bur fish. There is huge diversity to the reef life, with really lovely coral, encrusting sponges and sea fans. It's teeming with juvenile fish, and it was a delightful dive.
As I sit on the aft deck I’m looking at the sun sinking lower in the afternoon sky. And….hearing a marching band of some sort, drumming their hearts out in a fabulous way! Great rhythm, very precise and ... rather reggae. (The Royal Dutch Drill Team?) Or, the local school drill team practicing up on the hillside overlooking Oranje Baai? Neverthelesss, how very Caribbean. Cool!!
Hugs to all, Karyn and Ron at 1:55 AM