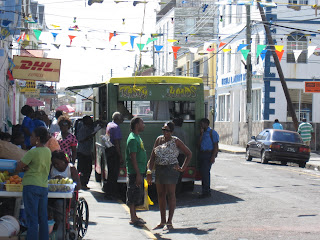 We walked about downtown Basseterre this morning, checking out the older town area around the Circus with the intention of going to Stone Walls, a highly recommended cafe, for lunch. However, it was Tuesday, and we discovered that Stone Walls is closed on Tuesdays. Of course! So we went to over to Ballahoo's, where Ron was delighted to discover that one of their signature drinks was a Bloody Mary. (This kind of echoes the futile search for half-and-half in the French islands, as none of the restaurants or bars in Statia's Lower Town had tomato juice. Which made Ron crave it all the more, since again, none was to be found!)
Lunch at Ballahoo's was delicious, and the views from the restaurant's open air balcony overlooking the circle were a treat. I had the local special: fish cakes with the ubiquitous peas and rice, and salad. Crispy and looking rather like huge donut holes, made from a whitefish of some kind. Delicious! Ron had their conch chowder, but made in the Leeward Island style with a fish stock base rather than a tomato base like the Bahamian kind. He declared it delicious as well. 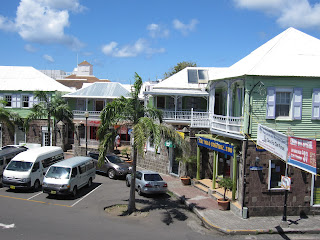 After lunch we went to Customs once again, for the necessary clearance down to Nevis, since that will be our final point south on this trip. We were finished in time to meet our taxi, which we'd booked for the afternoon. Anthony as our driver and he took us on a little tour of the east side of the island, up the coast through Bloody Point, Half Way Tree, to Sandy Point. Along the way, we stopped at the Caribelle Batiks workshop which is situated on the old Romney Manor grounds. It's a beautiful place, set up in the foothills to the mountains in Old  Road Town with manicured gardens and gorgeous landscaping. The grounds are dominated by an immense saman tree with a huge spreading canopy, which Anthony said was the oldest tree on the island, some 350+ years old. It was amazingly majestic!
We toured the Caribelle Batiks store and demonstration room where they make their signature St. Kitt’s batik. It’s really remarkable process; I’d not seen it before and there was a gorgeous display room where a woman was busy making a batik wall hanging, using the melted wax like a painter. It was fascinating to watch, and hear her description of how many times they wax and re-wax the fabric for the different colors.
From there, we stopped at an old sugar mill from the 1700s, and walked about the grounds.  St. Kitt's was settled by the English and the French (who shared the island between 1627 and 1713), and was the springboard for French and English colonialism in the Caribbean. After the native Carib and Arawaks were exterminated, Africans were brought in as slaves to  labor on the many sugar plantations. St. Kitt's no longer exports sugar (as of 2005), so most of the cane fields are now wild and overgrown. The sugar industry dominated their culture for hundreds of years, so there are numerous mills dotting the countryside. The ruins were very interesting; you could see the old boiler vats and the stone base of the  windmill, which was used to power the stones where they crushed the raw cane. Most of the stones are made from volcanic rock and ash. 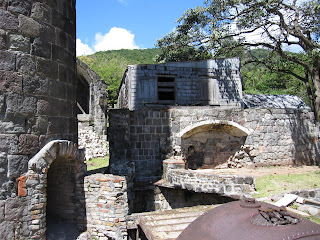 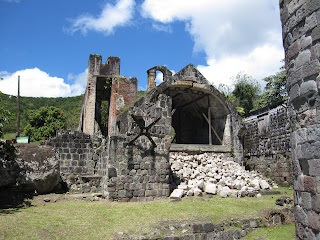 From there, we headed out to explore Brimstone Hill, and Fort George. The hill itself is immense, some 800 feet in elevation, and the fortress is a monument to the ingenuity of the British military engineers who designed it and to the skill, strength and endurance of the African slaves who built and maintained it. Now a World Heritage Site, it is said to be "one of the best preserved historical fortifications in the Americas" (shades of Captain Ron there!). Because of its imposing height and seeming invincibility, it was also known as the "Gibraltar of the West Indies". Cannon were first brought to Brimstone Hill in 1680, and building went on for the next 100 years. The scale and magnificence of the fortress showed how vital St. Kitt's was during the 17th and 18th centuries.


We spent a great deal of time walking the grounds, scrambling about the walls and ramparts of the fort and perusing all the historical displays inside. The walls of the structures are predominantly of stone, skilfully fashioned from the hard volcanic rock of which the hill is composed and laboriously fitted together. The mortar to cement the stones was produced on site from the limestone which covers much of the middle and lower slopes. The views from the top of the fortress are just stunning...the Atlantic to the west, and the mountainous terrain of St. Kitt's all around to the east. The pictures don't do it justice!


After a full day of hiking and touring, we were tired, and hungry, so once back in Basseterre, we asked the cabbies for a recommendation for a place for dinner. We ended up taking a short cab ride down to Frigate Bay, and had a relaxed beachside meal at Mr. X's Shiggidy Shack, watching the local boys play soccer on the beach. It was a lovely evening and a fabulous way to wrap up our short time here in St. Kitt's!