After all the excitement yesterday with the lockdown of the public pier, we were grateful to be back aboard in the evening, let me tell you! We relaxed over a fabulous dinner, feasting on the whole snapper we'd gotten at the market that morning. Ron was a tad leery, not being a fan of whole fish because of the many bones, but he'd purchased the fish knowing that I was excited to try out one of the Caribbean recipes I've found for whole fish. Fun!
The key is to liberally rinse the entire fish in lime juice, thoroughly,  inside and out, before prepping it with spices. I rubbed the entire limed fish with olive oil, lots of thyme, chopped fresh garlic, cracked pepper and liberal amounts of Old Bay (the essence of the Chesapeake!), then layered sliced onions and tomatoes inside. I also added a few slices on the outside before wrapping each in foil and roasting them in the oven. I let them roast for a good 30 minutes, then opened the foil to let the fish crisp up a bit before serving them. (I'd strategically covered the eye of Ron's fish with a slice of onion before I served it, which he appreciated!) They turned out utterly delicious! The fish was perfectly done, flaky and easily separated from any of the bones, a touch spicy and very delicious! A great evening dinner on the back deck, enhanced by the gorgeous scenery of the anchorage. 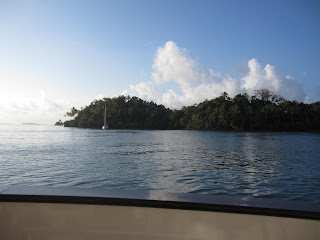 We also received a bit of a surprise yesterday evening as well, for the 10 lb. bag of flour we purchased yesterday at the market turned out to be....baking soda! Augh!! After all our efforts --- all in vain! We had to laugh, and laugh we did! I admit, I didn't taste the sample of flour I was shown yesterday, but perhaps I should have!! Oh well...we now have a year's supply of baking soda to use for cleaning and deodorizing around the boat! (Not that I can smell, but hopefully it will smell clean!) Note to self: "harina" is the word for "flour" in Spanish...
While we'd love to explore and see more of this beautiful country, we also have been keeping an eye on the weather, and knew that we didn't want to miss the opportunity to head out with a good weather window while we had it! So, this morning we were up early and went to retrieve our shotgun and receive our despacho papers to clear out of here. We met Martin at at 8:30 on an adjacent, smaller pier in town since the main pier was in an even bigger frenzy today than yesterday. Apparently, several hundred pounds of cocaine were discovered aboard the Sea Ray, which accounted for all the hub-bub of activity. We're not certain what was the situation with the Burger; after being quarantined all day, the soldiers and officers all disembarked this morning, and the captain and crew pulled anchor and left immediately as soon as everyone was off the vessel. Ron thought perhaps it was just a case of being in the wrong place at the wrong time, since the Burger arrived in the night at the same time as the drug-running Sea Ray. We'll never know!


As for us, trying to get the Samana Comandante to sign our despacho paperwork was a bit difficult. In his defense, he was more than a bit busy with the drug bust that was going down in the port! After a bit of a wait though, we finally got the clearance to depart and were given an escort by one of the Coast Guard guys who held our gun until we reached our dinghy. We clambered aboard, and again, were instructed to go straight to our boat without stopping. They certainly didn't have to tell us twice!
We immediately pulled Eclipse up into her chocks on the flybridge and made way.  I'd prepped Equinox the night before, battening her down for any potential rough seas, even though the conditions were forecast to be light. There's a huge cold front swooping in off the coast of Florida though, so we wanted to be underway while seas were still favorable here. We were wary of conditions changing, and debated where to make landfall, reviewing our options, keeping the weather in mind.
However....light winds, blue skies, calm seas prevailed! Rather than stop in at another port in the DR, we opted to go straight through to the Turks and Caicos, and duck in there before the predicted fronts raged through. The lure to push ahead to new territories was tempting, and we wrestled with it, to be honest! But reaching the anchorages in the Bahamas at Great Inagua or Mayaguana meant longer runs, which meant it would be a race as to whether we could get there before the seas picked up. Even if we made landfall before the fronts arrived, the anchorages there don't provide much protection from westerlies during frontal passages, so we decided to be conservative and head for a more protected port for the time being.
And so we cruise....enjoying the journey. I love soaking in the vistas of wide open sea and sky; the intensity of the incredible palettes of blue: the indigo, cobalt, turquoise and teal of the water so vivid against the bright, clear pale robin's egg of the sky. How lucky we are to be witnessing it, experiencing it! Those are the moments I savor, lingering over the sensation of the wind against my skin, the sound of the hull cutting through the water. Just being in the moment -- what a gift!