We left Basseterre anchorage just after 7:00 in the morning under blue skies and the usual trades blowing 15-20 knots. It was an easy run down to Nevis, the smaller sister in this twin island nation. The island is verdant and green, with steep hills. Clouds always seem to cap Nevis Peak – its highest point at 3232’ – clinging to the top and sometimes flowing down its steep sides. It’s quite pretty! After being fought over for years, both St. Kitt’s and Nevis became British under the Treaty of Versailles in 1783, and Nevis settled into being a plantation-filled island with sugar mills dotting the landscape.
We made easy time coming south, and arrived at one of the many mooring balls along Pinney’s Beach, just north of Charlestown’s main dock. Yachts of less than 90 feet must used the moorings if they are available, and we had several choices. We chose one near Sophia, as our diving friend Keith had sailed down ahead of us, and was already here. Shortly after mooring, we picked him up in our dinghy and then we all cleared in with the Port Authorities. (We didn’t have to clear in with Customs or Immigration again, having done so in St. Kitt’s, but we did need to pay for the mooring.)
From there, we walked through downtown Charlestown, and quickly became enamored of the place! It is so quaint, and so utterly Caribbean in atmosphere…most of the town buildings were first story stone structures with clapboard second stories, although there was a good mix of all stone to all clapboard. The old cotton ginnery along the waterfront is now a small plaza of boutique shops, and the library and courthouse date back to 1825! I could see the many shelves of books through the open second-story windows…the upper windows didn’t even have glass in them, only shutters! The white shutters against the classic volcanic stone bricks…it was a pretty building and very cool to see it still in use.
We also ran into a group of young fishermen who were selling gars out of a cooler. When I inquired as to how to prepare the fish, Collis, one of the fishermen told us the best way was to fry the whole thing up until it’s crispy and it would melt in our mouths. We decided to pass…the gars, while fresh, didn’t exactly have appeal for us!
Collis also told us we needed to go to Sunshine’s Bar on Pinney’s Beach and have one of their signature rum drinks, the “Killer Bee”. Thanking him, we moved on and walked to the grocery store on the southern edge of town, Best Buy Grocery where we scoped out the store to see what was available in terms of good produce.
Happily, their produce department was well-stocked, and miracles of miracles, lo and behold look what we found:


We had lunch in one of the tiny local cafes along the main street. We were actually led there by a nice lady on the street, when we inquired about a lunch spot. Its specials were huge platters of mutton, beef, chicken, ribs, and “boil-up” (apparently a spiced mélange of veggies, with cabbage, squash, carrots, and plaintains, among others less identifiable.) all served with salad, peas and rice In the late afternoon, Keith, Ron and I took the dinghy out for an exploration of Pinney’s Beach, and being uncertain where Sunshine’s was, we took a stab at it blindly from the beach. We found ourselves at the Double Deuce bar, where Mark, one of the co-owner’s, served us his own version of rum punch, complete with freshly ground nutmeg. The place was relaxed, low-key and lovely, and the punch was quite delicious. 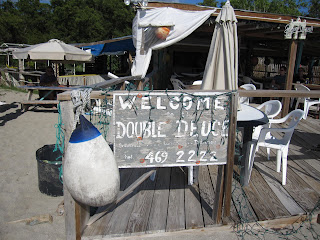 However, one was enough, so we doggedly moved further down the beach, and came across Sunshine’s. (Pinney’s Beach is a beautiful spot, although the surge was decidedly an issue, as it kept moving the dinghy even after repeated attempts using both bow and stern anchor to secure it. The bow anchor finally set, with 90’ out.)
Sunshine’s was a blast! Bright red, yellow and green colored tables and chairs, soft sofas facing each other across low tables were spread throughout the place. With its many flags a-flying and reggae music in the background, it had atmosphere! We ended up out on the deck, overlooking the palms, tucked onto the benches and a soft-cushioned sofa that had an amazing view of the sunset as we sampled the Killer Bee's, made by Sunshine himself. (More freshly grated nutmeg!) As always, we met another boatload of cruising folks and started chatting with them, exchanging stories as we all watched a pair of crew from a mega-yacht run back and forth repeatedly to serve their guests on the beach, each time slipping through our group, en route to the bar. By the time Sunshine’s famous grilled fish, chicken, ribs and conch came out in platters for us all to share, the mega-yacht guests and crew had joined us and bought us drinks as well! A riotous evening ensued, and needless to say, the Killer Bees stung us all! OUCH! 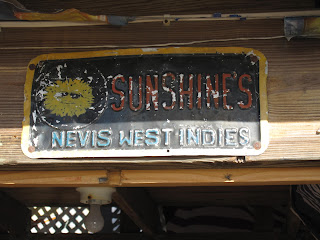