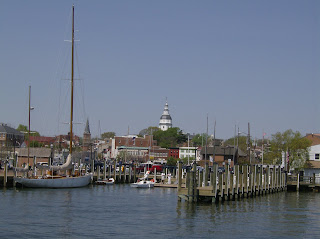 View of the State Capitol from the water
Okay, so we repeated ourselves and spent the weekend in Annapolis...AGAIN! On the wall in Ego Alley...AGAIN!! But first, we stopped by the NEW FLOATING DOCKS at the Annapolis Harbor Boat Yard to say hello to Kevin McPadden; we were waiting for the Annapolis Harbormaster to let us know if they had room for us on the Ego Alley wall when we spied Kevin down on the new docks. We cruised over, and tied up for a half hour or so, chatting and admiring the new docks...hugs all around!! Good to see them again!! We would have stayed there too, but because the Harbormaster was busy moving boats around to accomodate us on the wall, we didn't want to be rude and not show up! Still, lovely to see Kevin and John again, and got in on the photo op for the new docks next to AlizeAnn (newest 48' KK on the block to be commissioned there). Nothing like being the FIRST visitor to the new piers. Heaven knows everyone will love them. (I won't show the photos of the OLD piers!) 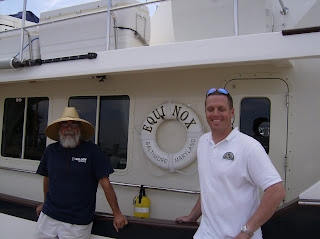 Kevin McPadden and John Norton next to Equinox

From there, upon getting the call on VHF 17 that the Ego Alley wall now had room for us (thanks to John, one of the Annapolis dockhands, shuffling boats fore and aft), we squeezed down the alley and docked up in front of the 48' SeaRay express SyJor, as luck would have it, also from BMC. She is berthed in a new-to-them slip across the fairway from us, and we met her owner, Alan, and his kids, Sydney and Jordan, who were enjoying Naptown for the weekend, too. Always fun to meet new folks! And, we ran into Tony from Tourelou, a beautiful 65' Fleming from Canada, whom we'd met in Spanish Cay in the the Abacos last spring and again in West End this year. Clearly, we're on the same cruising schedule!! 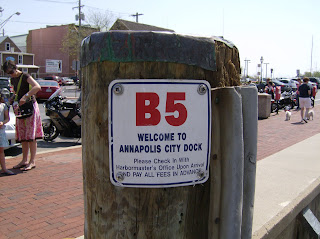 With the weather clearing and finally beautiful, we'd stowed our road bicycles (Trek Madones) aboard, so Ron and I went riding each day: Saturday afternoon we cycled out to Sandy Point Park (18 miles) and on Sunday morning we had a LOVELY morning ride out to Arundel on the Bay and Bay Ridge, near Thomas Point (19 miles). The trees were greening, the flowering trees and red buds were blooming, the birds were singing in the sunshine...a beautiful morning!! It felt great to be back aboard the bikes again!! We averaged 15.5 miles on Sunday, and were a touch slower on Saturday...but always enjoying the ride! 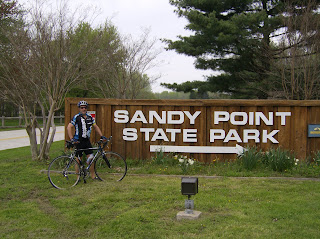 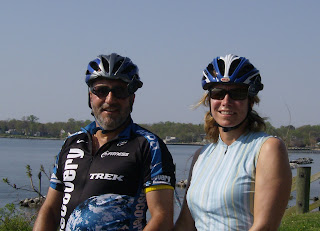 Ron and Karyn on the south side of Bay Ridge

From Annapolis, we had a leisurely cruise back to Baltimore Marine Center in the blazing sunshine; Ally sunned herself on the pilothouse roof while Ron and Karyn navigated and piloted back up the Bay. We got back in plenty of time for Ally to head off to a pool party, then lacrosse practice, then a birthday party (busy schedule). Tonight is quiet night aboard with seafood fra diavolo and a DVD, but right now.... it's 5 0'clock somewhere!!
Hugs to all, Karyn and Ron at 3:29 PM