From Baltimore to Annapolis and return! 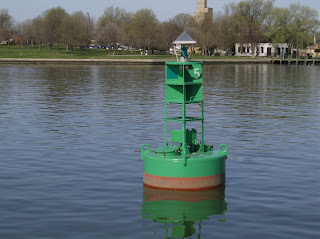 Passing green channel marker 5 on the way out of the Patapsco River
We had a glorious, sunny and warm weekend on the water! Friday was just lovely; we took Equinox over to the BMC fuel dock for a pump out in the afternoon, then Karyn practiced boat handling maneuvers alongside the out piers at BMC. We hosted Les and Amy Harlan for a short Inner Harbor cruise, then docked up near the Urban Pirates ship berth in Fells Point before walking to the Black Olive for a fabulous fresh seafood dinner. The grilled octopus salad was fabulous, as was the turbot that Ron and I shared. YUM!! It was a lovely night, and we really enjoyed ourselves. Ally had dinner at Ra Sushi with a pair of friends from OS, Lauren Engle and Kayleigh Lauman, who also spent the night aboard, so everyone had a nice Friday!
Saturday morning Ron, Karyn and Ally cruised on calm waters under sunny skies to Annapolis to meet up with Charlie and Trish Medico, who were there aboard Medici. We put out some fishing lines (in honor of opening day of rockfish season!) but got nary a nibble as we poked our way south, much to Ron's dismay. We came into Annapolis about 2:30, and slid into a spot on the wall, with Ron doing is usual perfect docking job. Looking good!! Both Karyn and Ally could not resist reveling in the warmth, and both fell asleep in the sunshine (yes, got a tad crispy there)!! 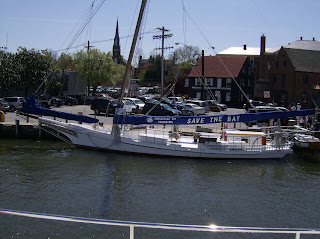 Opposite Equinox was the Norman Stanley in its slip on Ego Alley -- Ally was just aboard her on Tuesday! 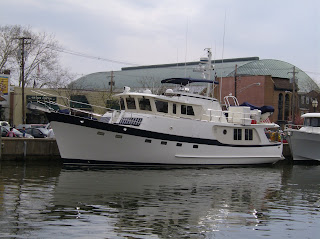 Equinox on the wall in Annapolis

Being on the wall is great; perfect for ease of walking about Annapolis, and its a reasonable rate for dockage. It's first-come-first-served, thus you never know if there will be space available until you arrive and call the harbormaster on the VHF. We're always delighted when we can squeeze in. The only drawback to being on the wall is that some folks passing by think the boat is there for display; Ron was rather taken aback by one group who asked if they could look at the boat, and if they could come aboard!! Folks don't realize it's our home!!

Trish stopped by for a glass of wine while Charlie puttered about with their boat dinghy, getting it up and running again after a long winter. Later, the five of us went uptown to Carppaccio for dinner, which was also a delightful evening. After a post-prandial walk back to the boat, we all relaxed on the back deck until rather late! Good friends, good food, good fun!! 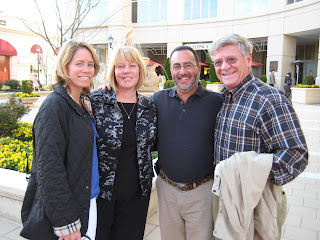 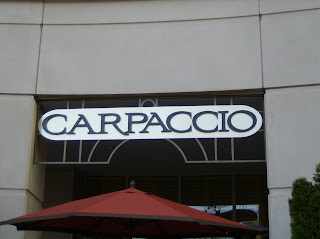 The restaurant is near the new Westin on West Street
Hugs to all, Karyn and Ron at 2:52 PM