...are never a five-minute job. NEVER! But, Karyn had a productive day all in all, and got quite a bit accomplished, even if it took her a good few hours. One of the galley propane tanks ran out last night, so Ron switched over to the second tank, and this morning Karyn took the empty tank over to Dundalk to be refilled. Since she was going anyway, Karyn also took the grill tank, and got that topped off too. We'll see how long the tanks last; they're now marked as of fill date and beginning use date to get a better idea of how quickly we use the propane.

Most of the time spent was driving to and from Dundalk, and (the hardest part) finding a cart to haul the full tanks back down the pier to the boat. Of course, Karyn had to go over to the west side of the marina to find any available carts, before unloading the tanks from the car and then returning the car back inside the garage. Lots of running around to accomplish a simple errand! Even parking is never a five-minute job!!

Once the tanks were back aboard and re-installed, Karyn worked at replacing the faulty InstaHot faucet. The stem broke on the old one and wasn't long for this world, so after a call to InSinkerator, we got a new one shipped out to us for very little money, as it was apparently still under warranty. Yes, wonder of wonders -- don't things usually break after the warranty period ends?? Amazing in itself, actually.

In any case, we received the new faucet and Karyn set about installing it last night only to discover that the compression nut and ferrule needed to reconnect the water line was not included in the kit. This discovery was made AFTER the old unit was disconnected (amidst a great deal of water continuing to come out of the water pipe even though the shut off valve was ... off!!) SO, mopping and swearing, the old unit was hooked back up. (TOLD you it's never a five-minute job!!)

This morning, on the way to get the propane, Karyn made a stop at Home Depot to find the necessary size compression nut. (Need I say it? Also NOT a five-minute job!) Armed with several absorber rags and a bucket to combat the leaking water, Karyn managed to wrestle around under the sink to disconnect the old unit from the countertop, with its connection ring nut super tight and right up against the sink where it could barely be seen unless you were twisted around onto your back half across the under-sink shelf looking up at it. NOT A FIVE MINUTE JOB!! 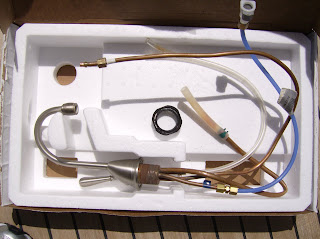 Remains of the old unit

Then, the whole project almost came to a sudden stop when Karyn discovered that a couple of the tubing and hoses of the new faucet were shorter then the old unit...quite a bit shorter, actually! But, thankfully, with careful placement of each tube and hose, everything managed to fit tightly. NO leaks, no drips, and no broken handle! Now, when aboard, everyone must compliment us on how nice it looks. It'll only take you five minutes! 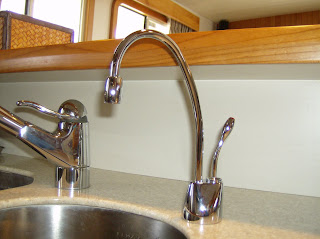 Shiny new InstaHot in place!
Hugs to all, Karyn and Ron at 2:16 PM