...one among many, actually, but today Sean from Bay Shore Marine allowed Karyn to follow him around the engine room as he tended to the 20 kW generator, doing its needed 500-hour service. So, coolant flush, valve gap check and inspection of the heat exchanger were all skillfully done, and now Karyn can do it (hopefully just as well) the next time. Sean also replaced the valve cover on the starboard main John Deere engine, which we noted was leaking a bit of oil. With Ron aboard later, we went out on a sea trial and tracked down the mysterious warming issue which we very recently noted at wide-open-throttle...turns out the exhaust manifold gasket (between the heat exchanger and the cylinder head) is leaking and needs replacement on both engines. We hadn't noted it before, only after we were concerned with the new impellers we replaced, and checked temps at all different speeds. The port engine runs warmer only at WOT, and isn't an issue at all at normal cruising speeds. We await Sean's return to take care of us, and for Karyn to learn more about the care and feeding of the engines! 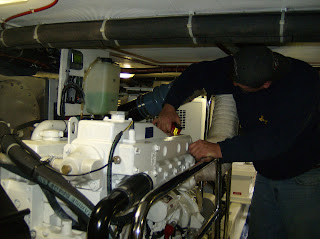 Sean using his infrared gun to check engine temps on the starboard engine
Hugs to all, Karyn and Ron at 5:51 PM