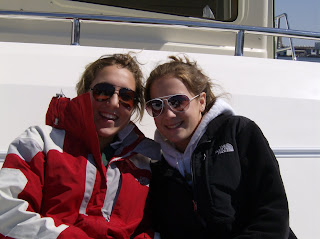 Ally & Eliza bundled up on the bow

We took advantage of the sunny weather on Easter Sunday to take a leisurely Key Bridge to Inner Harbor cruise with the Stromes, Kimberlee and Scott and two of their three children, Arianna and Max. Ally had her good friend Eliza Witherbee along as well; Eliza is from Massachusetts, and a boarder at Oldfields who was able to spend the weekend with us. SO, we had a fun cruise introducing the harbor waters to everyone, since none of the Stromes had seen Baltimore by water before. We cruised past Fort McHenry and Max piloted out to the Key Bridge (much to Arianna's concern) and then back to Fells Point for a lunch at Shuckers. While it would have been better to have had warmer weather, everyone still enjoyed themselves and it made for a lovely day. 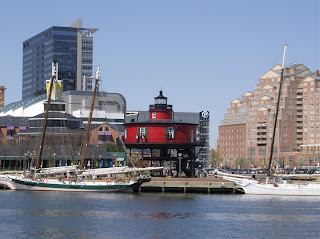 Above is the Seven Foot Knoll lighthouse. According to the Baltimore Maritime Museum, the lighthouse is the oldest surviving screw-pile lighthouse built as an aid to navigation on the Chesapeake Bay. It was built at the mouth of the Patapsco River in 1855 and marked the shoal known as "Seven Foot Knoll" for 133 years. Its beacon was first lit in January of 1856.

The innovative screw-pile lighthouse design, which made its first appearance in the United States in 1850, eliminated the need for underwater masonry foundations to support a lighthouse. Screw-pile lighthouses were suspended above the water by a system of cast-iron pilings with corkscrew-like bases, which could be screwed into the soft mud of the sea floor. The Seven Foot Knoll Lighthouse was the second screw-pile lighthouse built on the Chesapeake Bay and was constructed on nine cast-iron screw piles supporting a gallery deck some nine feet above mean high water. Seven Foot Knoll was equipped with a 4th order Fresnel lens visible for 12 miles. After decades of service, the lighthouse was automated in 1948 and was Coast Guard maintained, but unfortunately the structure fell victim to its age and the elements. By the late 1960's, plans were underway to retire the light and replace it with a new navigation marker. However, the lighthouse continued to serve as an active aid to navigation until it was moved to the Inner Harbor in Baltimore in 1988, when the Coast Guard donated the lighthouse to Baltimore City to be preserved as an historic landmark. 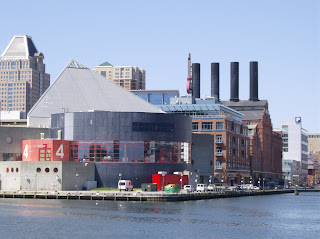 Approaching the back of the National Aquarium in Baltimore, with the old Power Plant in the background. It now houses the Baltimore Hard Rock Cafe, ESPNZone, and Barnes and Noble, among other restaurants and attractions nearby.
Hugs to all, Karyn and Ron at 8:05 PM