While awaiting the arrival of our friends aboard Concrete Idea and Amore, Ron and I made an early dive at a site off Gun Cay called North Tuna Alley -- gorgeous, with just a little current. Certainly nothing like yesterday! The reefs there have great bushes of black coral, huge sponges and deep ravines and crevices with all sorts of fish life. This is one area where we didn’t see any lionfish, for a very welcome change! And, while we were doing our safety stop on the mooring line, a huge hawksbill turtle swam right up to us before circling away. I love seeing turtles, they are just so serene.
After the dive, we stopped at the derelict pier on Gun Cay, tied off Tingum and delicately crossed the ramshackle boards of the pier to walk about the cay. We checked out the big red and white light house there, which I think was built in 1863. It still has a functioning light at its top (solar powered) but the rest of it is in disrepair. The door is open, so one can enter and see the dangerously decrepit spiral staircase that winds around the walls of the interior. Besides the light house, there are two derelict 1-story lightkeeper's quarters and an oil house, and the remains of a radio tower, clearly destroyed by a hurricane. The walls of the cottages are incredibly thick, probably a good 2’, although the rest of the house is falling in on itself. Still, it allowed one to readily imagine what it might have been like to be a lighthouse keeper here 140 years ago! 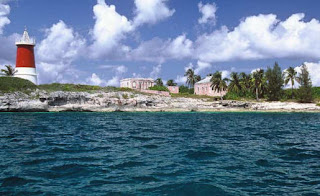 Stock internet photo of Gun Cay
(I was sorry I didn't have my camera along!)
On our return to the marina, we stopped for a second dive at the The Bimini Barge wreck...this one down at 70’ or so. No sooner had we descended on the mooring line and reached the wreck, when a large hammerhead shark approach us as we reached the wreck!! Very cool!! As is usual with hammerheads, they tend to be somewhat solitary and will often approach divers with a single pass. That is precisely what this one did, and after he checked us out, just swam on past. They are such unusual looking creatures! The locals told us that hammerheads are seen rather frequently here, since they like to feed on the eagle rays that cruise the channels of North Bimini. We’ve only seen a hammerhead once before in all our other dives, so we were delighted.
After the other boats arrived, we  helped them tie up and get settled. While the guys went off to the airport to clear in, Ron and I went out to dive once again in the afternoon, this time off North Bimini at one of the dive moorings. We saw another big hawksbill turtle once again, this time resting in the reef. He stayed there quite a while dozing, which let us observe him closely until he decided he awoke rather grumpily and lumbered off. We also saw a large green moray tucked into a hole, a large southern ray, and I found an old, old Coca-cola bottle from the 1950s, totally intact. Very fun dive indeed!
We snorkeled on the way back, and tried our hand at using the Hawaiian sling pole spears. I’m not much of a hunter, but Ron snagged a lion-fish, which actually wasn’t hard since they aren’t afraid of anything (having no natural predators) and just sit there. According to National Geographic, the lionfish has an array of up to 18 needle-like dorsal fins that are venomous. A sting from a lionfish is extremely painful to humans and can cause nausea and breathing difficulties, but is rarely fatal, so one needs to take care while catching and cleaning them. Now there is one less on the reefs! We tried to clean our catch later, but our filleting technique leaves a lot to be desired -- while we were successful in getting the spines off without incident, we didn’t have much else left over for fillets! 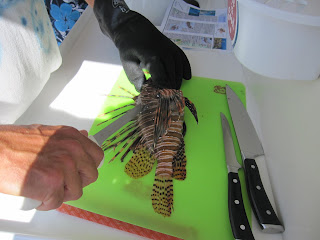 Ron cleaning the lionfish. Be aware, although
the meat is delicious, the spines are venomous.
Hugs to all, Karyn and Ron at 9:03 PM