Not the best day ever...

This was not the best of days, at all. It started out very badly when I noticed one of our folding bikes wasn’t on the finger pier between the boats where we’d left it. I just thought Ron was out for an early morning ride, until he walked into the salon a minute later. When I asked him if he'd moved the bike, he said no...so we realized the bike was missing. Ron jumped in with his dive gear to make sure it hadn’t fallen off the pier into the water, but there was nothing under the pier but fish and they certainly weren’t bicycling about.
The bikes weren’t visible from the entrance or even from the dockmaster’s office, so it had to have been someone who actually walked by the boat itself enroute to the resort grounds and slips past our berth. It was really disappointing; during our entire time -- nearly 6 months -- in the Bahamas, we have never had an issue with our boat or gear, nor felt security was ever an issue. Needless to say, the staff at Bimini Sands were very upset, as  they’ve never had any issues with theft before, since the island is so small and everyone knows one another. The night guard at the marina stationed by the main entrance never saw anyone leave with it, either. The staff suspected it could have been taken by the boaters who had left earlier that morning, and while we don't want to believe that cruisers would steal from other cruisers, a folding bike made for boaters would have appeal, and all of the boats beyond our slip would certainly have seen the bikes there. In any event, the bike’s only attraction was its bright red parrot horn on the handle bars since the rest of the bike was rusty and rather worse for the wear. Not exactly a prize item as it needed to be replaced soon, but it did dampen our spirits to have it taken.
Ron and I decided not to dwell on it, so to distract ourselves we cruised south to Gun Cay and Cat Cay to make a dive. We cruised a good ten miles south in Tingum, only to find that there were these unusual, wicked-fast currents flowing, so diving was not an option. Since we couldn’t dive, we went snorkeling around the SS Sapona, a concrete-hulled cargo steamer that ran aground near Bimini during a hurricane in 1926. There wasn’t any current on the banks so it was a relaxing snorkel, and the wreck is filled with fish, from sargeant-majors to grunts and chub, to parrotfish, damselfish and angelfish. The remains of the ship are easily visible for several miles, since the hull wreckage stands so high out of the water on the shallow bank, in about 15 feet of water. It’s both a navigational landmark for boaters as well as a popular  snorkeling site. 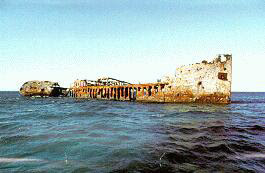 The SS Sapona on the Bimini Banks
For a bit of history, the Sapona was built as part of a fleet of concrete ships authorized by Woodrow Wilson during World War I, because steel was in short supply at that time. Like many others in the fleet, the war was over before the ship was completed, and the Sapona was sold for scrap. Rather than being destroyed, however, it was used for oil storage, and later, as a warehouse for alcohol during the era of  Prohibition. In 1926, the ship ran aground in a hurricane and broke apart. During WWII, the wreck was used for target practice by the U.S. Army Air Force and the U.S. Navy, so little concrete is left on the hull because of the effects of bombing and weathering.
We tried yet again to dive in the afternoon -- twice! -- but to no avail, as the currents were still ripping along. Oddly, the currents didn’t seem to be tidal in nature, as they continued unabated throughout the day and through the next tide change. Each time we checked, we had the same result: too much current to dive safely. Argh! In fact, rather than diminish as we’d hoped, the current actually seemed to have increased in speed; the last time Ron jumped in the water to check it out, he found he had to grab the swim ladder almost immediately to keep from being swept past the boat. Nope, not divable conditions!
We wound up the day not by having margaritas or celebrating Cinco De Mayo, but instead, by having a great sushi dinner down at the Bimini Sands Beach Resort, thanks to Chef Jeremy. It was a treat indeed, and one we thoroughly enjoyed and needed, especially after such a disappointing day.
Hugs to all, Karyn and Ron at 8:23 PM