Well, another couple of days of bicycle rides, boat projects, and mundane errands! Bright and early Monday morning, Ron took Tingum over to the dealer where she will get several punch list items repaired and some extra work done as well. It was a gloriously quiet morning, so his cruise around into Stuart was a smooth one. Thankfully, he took it over before it started raining cats and dogs! The weather has been warm and sunny of late, but that is changing as there are isolated and scattered showers in the forecast for the upcoming week. After I picked up Ron at the boat dealer's, we stopped in Stuart for a bit of breakfast, eating outside on a sidewalk porch. We had barely started our meal when it was interrupted by a real tropical downpour, complete with thunder and lightning. Glad the porch and awning provided some cover! With the rain and intermittent storms throughout the day, we took a rest day from biking; after riding 55 miles over the weekend, we didn't feel too badly about doing so!
We ended up having to attend to an unexpected car repair later, as the car onboard systems computer kept insisting that we "check coolant level". We took the car into a repair place, where they discovered that the coolant reservoir was cracked. (Just another item in the lengthy list of to-dos! At least it's not boat-related!) Tuesday morning, once the part was in stock, I took the car in for repair and waited while they replaced the coolant tank. After I got back, Ron and I were able to get out for a bike ride, this time just doing a bit more than 15 miles, and thankfully without a great deal of wind for a change! We've been trying to bicycle in the morning before the winds pick up and the storm clouds roll in. We were lucky to finish up before the afternoon rains arrived yet again.
We did see some more "mailbox art" during our ride, so I'll include just a couple more photos of those. I have no idea about the reasons behind some of them, but it's really starting to amuse and amaze me, how elaborate some of the designs are! Fun!! 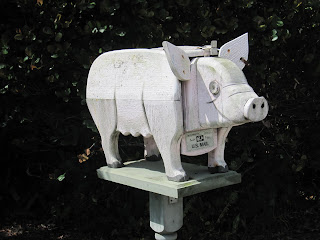 Complete with a tagged left ear! 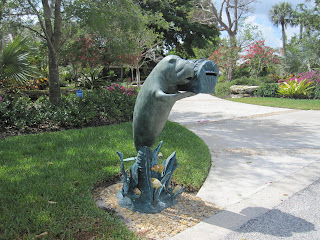 This manatee mailbox sculpture is amazing!! It includes reef fish
and sea fans at its feet, and a mailbox door in the shape of a shell.

I spent a good part of Tuesday afternoon aboard Equinox, sorting galley items and doing yet more cleaning. As far as the gel coat work goes, that is almost finished, but we're awaiting better weather (i.e., no rain) before the final painting can get done on the cap rails. It's looking good so far, though! Of course, we have assorted other jobs queued up, from detailing and waxing to oil changes and maintenance, and are coordinating those as we can. Yep, living the life!!
Hugs to all, Karyn and Ron at 9:13 PM