Please remember those veterans or current members of our armed forces. It's due to their sacrifices that we enjoy our freedoms. Gratitude, truly.
As for us...it was, oddly enough, the first weekend we haven't been out on the boat in 15 years. Thus, it  felt very,very strange indeed!! In the distant past, we'd have been skydiving our butts off at big boogies (The Herd comes to mind, but I'm dating myself) or, in recent years we'd have been have with our friends Paul and Muriel aboard one boat or another, with their two girls and Ally, but...this year, Ally is in Argentina with her school May Program doing language immersion community service along with cultural programs and sight-seeing, so we aren't together with friends this year. :( So...definitely not the norm!
Not that we've jumped in about 10 years...but the memories remain! In the meantime, in the last 15 years, boating, cruising and living aboard have been our focus. Thus, last year at this time we were aboard Equinox on the Chesapeake watching the Blue Angels practice their Memorial Day routine over the Patuxent River, aboard with Paul and Muriel, but this year, Ron and I have spent the weekend land-locked in Florida and, kind of lonely! Albeit, we are in our beautiful new condo and while it's a change of pace from being aboard, it does feel strange not to be aboard commemorating Memorial Day with friends and entertaining. We've had a quiet weekend, just the two of us....we got out to do some bicycling in the mornings (16 and 23 miles respectively for the weekend) as well simply doing other needed chores. 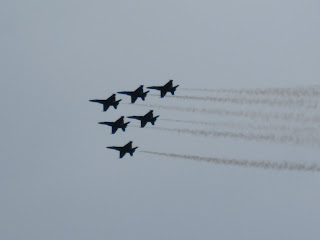 Watching the Blue Angels practicing over the Patuxent River
for their Memorial Day 2009 show while aboard Equinox
The boat has been getting detailed and waxed this weekend as we speak, and we are happy with how it's turning out. It's looking fabulous...Richard and crew are meticulous, doing a great job! How nice it is to have Equinox back in fighting form, for she is gleaming!! On the home front, Ron and I kept busy with cleaning out our storage room in the condo garage, rearranging items and bringing up the last 6-8 boxes of books, office supplies, odds and ends and photos/negatives that were stored and still cluttering up the space. We're trying to purge all the non-storage items from the area and keep it for boat stuff and other long-term storage stuff.

We have a busy week ahead though, with lots of boat work to be done. We are hoping to cruise over in the Abacos for July, so have a lot to maintain, repair and tweak after our six months in the Bahamas this past winter. In the meantime, June is upon us, as is hurricane season! Ugh!! Like I said before, we're new here, so we have not experienced any hurricanes, except in Maryland. There, it was simply dealing with storm surge and somewhat high winds, and certainly nothing like what they've experienced here in Florida!! So, we are putting together our contingency plans should a storm arise, trying to be somewhat proactive and have things in place should we need to haul the boat, hunker down at the condo or (worse case) evacuate. Here I thought provisioning for the boat was unique, but folks here make sure they have enough water and non-perishable foodstuffs that can handle an extended camp-out routine that just isn't imagined in the north! So, we're trying to follow suit and be prepared ourselves!! I'll just keep hoping for a calm season here and a gentle learning curve!
Hugs to all, Karyn and Ron at 11:12 PM