Ron and Karyn left Baltimore early Thursday afternoon, getting a jump on the holiday boat traffic and an early start south. We cruised to Annapolis, but didn't stay on the wall --no room anywhere, since the Naval graduation and the Blue Angels air show during the ceremonies were on Wednesday and Thursday resulting in a full house for Naptown! Instead, we dropped the hook in the anchorage in front of the Naval Academy. It was a glorious sunny afternoon, with light south winds, so it was perfect for a quick night's anchoring. After a delicious dinner at O'Leary's, we took the water taxi back to the boat and enjoyed a quiet evening on the back deck. I admit, we did not sleep all that well, since once on anchor, both of the Furunos keep locking up on us and thus lost our anchor alarm each time. We knew it would lock up in the night... SO...strange dreams of dragging anchor intruded on fitful sleep at best! 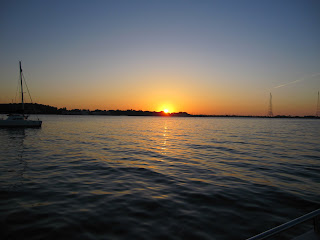 Despite the lack of sleep, we were up early with the sun, and headed out of the anchorage by 6:15 am. A lovely cruise south was only marred by the Furunos continuing their periodic freeze-ups, and the few degrees of temperature difference of the port engine. We carefully charted cruising temps, fuel burn, engine load, rpms, and oil pressure every 15-30 minutes, to aid in diagnosing the issue. Ron very carefully kept the temps in check.

We arrived about 11:15, and easily tied up at Solomons Yachting Center on the C dock T-head. Lovely view of the water from here!! As we've posted previously, the reason we're here in Solomons Island is to get a haul-out for some maintenance work along with inspection of various systems in preparation for our summer cruise to Bermuda. Since we were down here, Ron called Drum Point Marine, the John Deere specialists, to come aboard this afternoon to chart the port engine temps. They performed and certified our original sea trial, so they know the magic! We'll sea trial again with Gary G. aboard and see what his diagnostic numbers tell us! 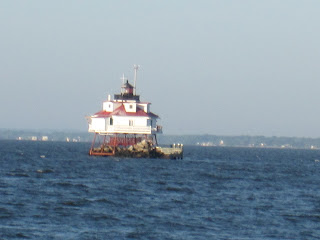 Once the sea trial is completed, we'll be back in the slip awaiting the arrival of Paul & Muriel McDonnell, who will be joining us for the holiday weekend!! Let the fun begin!