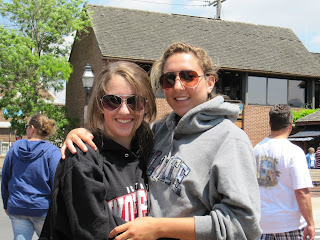 ...with the family! Ron and Karyn cruised south very early Friday morning after Ally headed to school, and were docked on the wall in Ego Alley (yet again!) by 1015 -- we'd planned on getting there early, to drop off the dinghy and get the annual engine maintenance done that morning by the dealer. While we could have done it ourselves, we wanted the stereo connection checked as well, and happily, the dinghy was serviced and returned that afternoon!

We basically ate our way through the weekend in Annapolis...Friday afternoon, it was oyster shooters at Middleton Tavern (yum!!) and later that night we had absolutely awesome sushi at Tsunami with Jim and Lisa Dean. A very fun evening! Saturday morning while we were enjoying a glorious 20-mile bike ride, Ally drove down and met us back at the boat. Sunshine, dinghy rides, and a great lunch at Pussers followed. All lovely!! That night, we had dinner at Jerry's Seafood, which was, well, interesting....not to quibble here, but the name really should be Jerry's Crabhouse! Literally, the choices of appetizers were all variations of the same theme: crab, crab, crab, crab, shrimp, shrimp and crab. (I counted.) The entrees followed suit, with the same litany of crab. Any other seafood was almost non-existent, to the point of being almost unbelievable....even the special of the day, a filet mignon, had crab on top. While we love crab, it definitely wasn't what we were expecting, to be honest...was rather looking forward to a nice mahi-mahi fillet or fresh grouper, but that will be for another time, clearly. The crab cakes were good though!!

Mother's Day Sunday we walked up to the new Westin for a family get-together with Ron's sister Laura, husband Jeff, and Ally's cousins Marina and Jordan. The brunch buffett was utterly delicious!! It was so big that we actually missed the dessert tables, but by then, we had already eaten until we thought we would burst. Just as well! We then headed back to the boat to relax in the windy sunshine and enjoy the boats and people cruising by, before a late afternoon departure back to Baltimore. A lovely day, and thoroughly enjoyed by this mom! 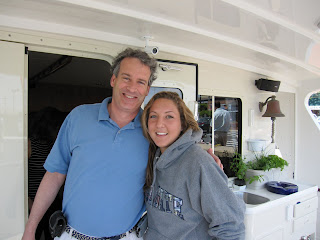 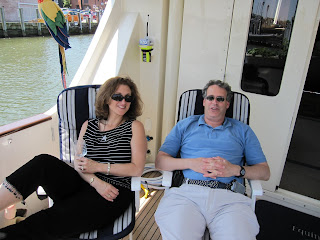