Well, the fog never lifted all Saturday, nor did it budge Saturday night, NOR into Sunday! We came around Cape Henry into the Chesapeake Bay with radars running (as always)in conjunction with the AIS and chart overlay...LOVE the technology!! And totally needed it in the butter-thick fog that covered everything! Of course, we also chart our position on paper and keep copious notes of course over ground, speed over ground, lat & long and important engine readings, too...but the fog was AMAZING!! Truly instrument-rated piloting!! We checked in with the Cape Henry Tower to confirm our route up the Bay and to reassure the big-dog container ships and tugboats that we would stay out of the channel along the green cans. Ron did a great job piloting most of the night from 10-3; he was totally jazzed and enjoying himself immensely especially since the seas were flattening beautifully, so he took a longer-than-usual watch. With the calm waters, I slept like a log, then handled my watch until well after sunrise. Sunrise being relative in the dank gloom, that is!! Ok, so the fog was white as opposed to being dark! 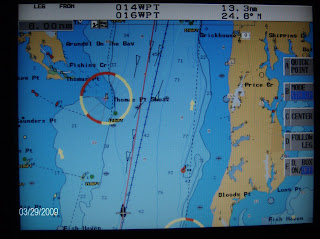 We had so many AIS contacts anchored off Annapolis it was almost funny. I took a shot of the chart plotter showing all the ships...they weren't going anywhere in the fog, or were waiting their turn to come into port. When we crossed under the Bay Bridge, we couldn't see the stanchion on either side of us, but if we looked up while we were dead under the bridge, you could see it for a moment. Disorienting!!

Our first glimpse of land after 96 hours at sea was LITERALLY when we came alongside Bethlehem Steel at Sparrows Point....an eerie sight, actually. The fog continued to be so thick that when we reached the Key Bridge, we actually could see part of the stanchions there...but nothing else. Check out the photos!! 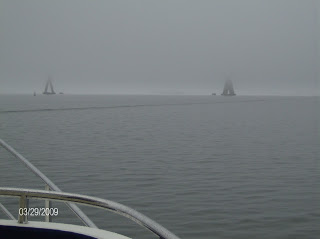