The weather changed from sunny to cloudy and squally, and the resulting ugly seas combined to convince us to head closer to shore, so at 6 pm we changed course towards Charleston if we needed an out rather than take the rhumbline up to the Carolinas. (It wasn't much of an option, as we were so far offshore that we had 9 hours to go before we would have reached port.) But winds increased to near gale force conditions, gusting over 35 knots. The wind was whipping the water, taking the tops of the waves off and skittering them along like snow blowing along an icy street. The hard part was not the 8-10' following seas from the south, but the huge 6-8' NE swell that would roll in from the outer Atlantic. When the swell and waves met up at times, it was downright intimidating. Looking UP at the waves from the pilothouse was a bit unnerving for me, to be honest!! I found that watching the waves was a mistake, for I would brace myself each time, always anticipating the worst boat motion! Of course, my imagination was always worse than the reality, so made for a tense ride. If I busied myself with something and just let my body adjust to the boat motion, it was actually much easier!! By 10 pm, we were out of the Gulf Stream, and conditions improved markedly, with no NE swell and smaller waves. With the better conditions, we changed course yet again, to continue to the Chesapeake.

So...Right now we're bouncing our way towards Hatteras, about 35 nm offshore. While closer to shore, we would have been smarter to angle to Wilmington NC, rather than head for Charleston(although that was a known port to Ron and easier to enter at night). But now, our course to Hatteras is giving us a quartering sea on the stbd stern, so we're rolling a bit at times. I admit, I LOVE our stabilizers!

Ron of course, had to put out the fishing lines...and the first fish to hit was a bluefin tuna!! YUM!! 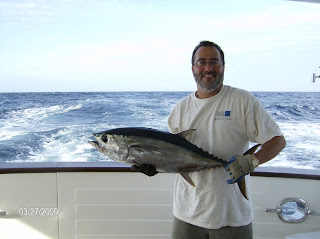 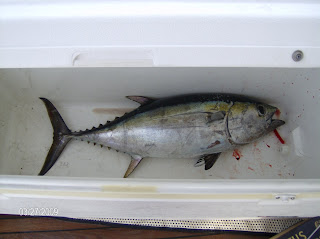 We caught several false albacore after that, but it was catch and release with them, since they are supposedly poor eating. They sure do put up a fight though!! And we're getting better at landing them now too, which is a good thing. Now all we need is our filleting skills to improve!