Miles Aweigh made the crossing from Port Everglades today!!! We were wishing them good weather, because the Gulf Stream was forecast to be a bit rough. However, Dede, Shelley and Capt Kevin made it easily, cruising at 11 knots most of the way until they stopped to cut loose their new tender Miles Behind, which they'd been towing. Shelley piloted it in from about 8 miles out. We'd been hailing them on the VHF for quite some time with no response; apparently their flybridge radio was not turned up/inoperative.

Turns out we weren't the only ones hailing them with no response, for the USCG cutter Kingfisher came alongside with lights on and asked them to stand to for a bit while they they confirmed the registration and ownership, etc!! After her identity confirmed and all questions answered, Dede was finally allowed to head on into Old Bahama Bay. Ron and I were out diving at the time and missed all of this; while we hailed them from the dinghy right before our dive (again, no answer) when we hailed them again after our dive, Miles Aweigh was already in the marina and tying up!! Needless to say, there was raucous celebration and cheer as we reunited!! Dinner and tales aboard Equinox lasted until the wee hours! 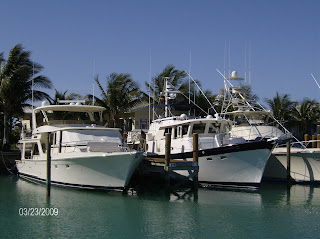 Miles Aweigh and Equinox side by side at Old Bahama Bay