Back Home In Baltimore... 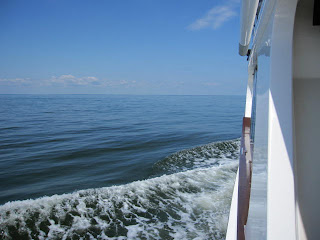 Calm Chesapeake morning
...after 5 weeks away! Saturday morning we were underway with the sunrise and had an absolutely beautiful cruise coming down the Chesapeake from the C&D to Baltimore on calm, mirror-like waters -- what's not to like?? Especially after the rough crossing from Bermuda! But, as Ron likes to point out, now that's just a distant memory and it doesn't dim the wanderlust to do it again! We ran the boat from up top, as it really was a lovely cruise down the Bay, and days like that really make you appreciate being out on the water! 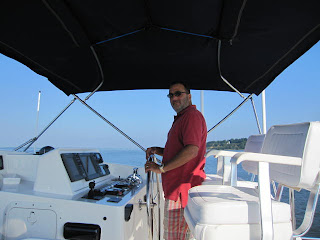 Ron at the flybridge helm
Coming up the Patapsco River into Baltimore was a tad exciting, as we heard lots of chatter on the VHF that the center span of the Key Bridge was closed due to Coast Guard and police activity with divers in the water. We monitored the radio all morning, as there were reports of someone in the water, coupled with an abandoned car on the bridge -- but apparently, all a false alarm. Otherwise....glad to be in home port for a change, and good to see all our boat neighbors! (Although, it was odd to pull in and see that Medici is no longer next to us....miss them, but know they are loving the Thousand Islands up north!) Taurus in now in the slip next to us. 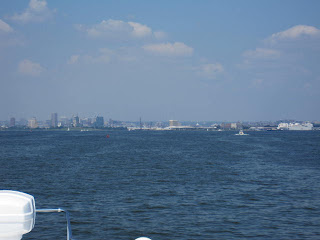 Blue skies over Baltimore on our approach
Our return to BMC was marred by the fact that they had rented out our slip while we were gone (unbeknownst to us) and unfortunately, every one of our set docklines were either untied from our original positioning on the dock cleats or....missing altogether! Ron was rather upset about it, as it made tying up a bit hectic as Ally and I scurried to grab additional lines from the lockers at the last minute when we realized what we were dealing with. We will be keeping an eye on whether or not they bill us for any electric charges that were incurred while we were gone. (Tain't paying for that!) BMC did replace the two docklines when they heard we were missing them, which mollified Ron somewhat. He spent the afternoon splicing proper-sized eyes in the lines for the hawsepipes, and re-setting the lines where we needed them on the dock cleats.

We now have internet once again, although that was an issue upon arrival as well, as it wasn't working at BMC either. (Now, what's the common denominator with all the ISPs not working? Us? Let's hope not!) It really didn't matter on Saturday, since we were busy enough with other things to do that we didn't have time to get on-line. Getting in as early as we did allowed us to get the boat back in order, hit the pool for a bit with Ally, and chat with boat friends, then join our house neighbors for a surprise 25th anniversary/birthday party that Saturday night. Whooo --a whirlwind of parties all over again -- shades of Bermuda!