Offshore, Back to the States

Right now it’s 1 o’clock in the morning and I’m on watch. It’s been a hell of journey the last 48 hours with the weather… NOT what was in the forecast when we left two days ago, I might add. When we left Wednesday morning, NOAA’s 24-, 48- and 96-hour wind and wave reports were very favorable, as was Bermuda Weather’s marine charts, so it was a go for departure. Wednesday wasn’t too bad, but the very first revised forecasts we received via satellite Wednesday afternoon/evening showed significantly higher winds and waves in the area where we were headed. After some discussion, we detoured a bit westerly rather than following the rhumbline northwest in an effort to stay in better seas. But it really didn’t matter, as there were squalls everywhere with a huge front blossoming that spread from Florida to the Carolinas. It was moving northeast -- we’d have to cross it, no matter what evasive actions we took. At our speed of 7.6 knots or thereabouts, we weren’t evading any weather, anyway.

SO…onward we went. Wednesday evening we ran into some 45-knot wind squalls and intense rainstorms that whipped up the waves and reduced visibility to whiteout conditions: always exciting and anxiety-producing, for me anyway. Regretfully, due to its almost-impossible difficulty, we hadn’t taken down the bimini top on the flybridge this trip, so spent each storm listening to it rattle incessantly and wondering when it would start to shred or take off entirely. We watched lightning off our bow, but thankfully never saw any of THAT up close and personal, and just endured the higher-than-anticipated seas. We kept telling ourselves that things would eventually calm down, but the high seas continued into Thursday with no relief, despite what the wind and wave forecasts had predicted (and continued to predict, with each satellite download, to our incredulity). Being out there, we can attest that the forecasts were wrong! 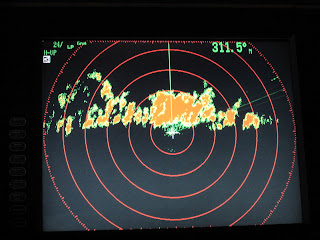 Squall line ahead of us on radar
Thursday we were rolling 15-20 degrees with each wave, rocketing about in beam seas from the front sliding NE as we crossed towards the NW, first in 4’-6’ seas, then in increasingly larger seas until we were seeing 10’-14’ waves. Not a lot of fun, and it’s not an exaggeration to say there were a few 20’ waves in there, too. Did I say how much I love our stabilizers? Then, feeling like we were rolling too much after some 30+ degree rolls, we adjusted course to reduce the danger of being rolled entirely by an errant wave. Ron turned us about to try running with the waves behind us, but soon realized we were only getting pushed off course farther NE into worse weather yet. SO….we opted to head west to try to cross the line of storms before the worst arrived. Plunging into the waves and burying the bow a few times, we settled in for an ugly race along the shoulders of the waves to beat the stormline approaching some 100+nm from the southeast. Again, at 6-7 knots, we were the tortoise, the storm was the hare. 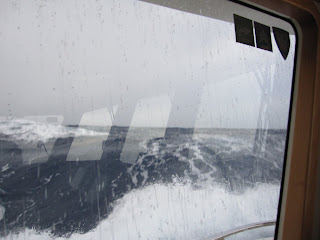 Some of the approaching waves
as viewed from the pilothouse
Instead, we found squalls that sprouted, flourished and grew around us. Literally, Ron said he felt like he dragged a squall along with us for nearly 12 miles, as it kept re-forming around us, bowing out and then encircling us again, for about two hours! The Bermuda Triangle effect? We didn’t think so, but it was getting weird out there! And we still had the approaching front to contend with yet. 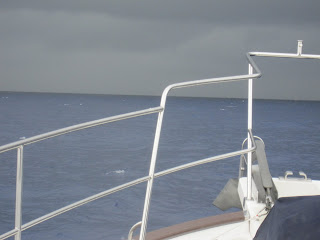 Another squall approaching and looking ugly
Then, somewhere in the early hours of Friday, within the space of an hour, we went from huge rolling beam seas to short, choppy head waves, wherein we pitched violently and had to slow down to barely 6 knots to make any way whatsoever, without snapping our necks and/or the boat mast. In fact, we slammed into some head seas so roughly that we got water in the forward cabin again, through the two portholes, when the gaskets were displaced from around the edges. (Not sure if they were properly installed or not, but they weren’t sealed in place and were very loose indeed: bulging out from under the lips of the window frame, letting in water with every slamming wave). Water shorted out the outlet near my side of the bed...thankfully, we’d been checking the stateroom very regularly so Ron noticed the water when he checked at watch change. SO…major mop-job and gasket re-securing (as best as could be done underway) was necessary and thankfully while it wasn’t a lot of water, but now we’re paranoid about the windows again.

We really got bounced pretty good here….not totally beaten up, as the boat is doing well otherwise but for a few leaks here and there, but … it’s a boat! Always trying to shake itself apart in a hostile environment, thus you have on-going maintenance and a watchful eye is necessary. But, I love Equinox. I feel very safe and secure aboard her; she’s a stout little ship. My attitude is that yes, we do have a few leaks, but with the exception of the cabin portholes letting in so much water, I feel like the boat’s solid. The engines are consistently humming along, and thank goodness the stabilizers have been trouble-free. We really put them to the test this trip with the heavy weather. Gratitude!!

So, heavily fatigued (neither of us could sleep or eat in such horrid waves – moving about meant hanging on or getting slammed about) we soldier onward, still 161 nm from Cape May, with an anticipated arrival in the wee hours tomorrow morning, about 26 hours from now. Not sure how we’ll do that….will need to wait for the high tide; if we recall, it’s a bit thin in by the Canyon Club so we want decent water under the hull after all this way.

This return journey has been pretty brutal at times, but the trip itself was SO worth it. I loved every second in Bermuda!! The new friends that we met and who are now so dear to us, the times we had with them and the things we did to explore and acquaint ourselves with the islands…it was fabulous. Being on no schedule enabled us to spend about 5 weeks there, which was lovely. The fact that we arrived in our own boat by ourselves is a feat not everyone can claim! While many folks have done it in worse conditions and in much smaller boats, what I’m most pleased about is that we had the courage to do it, and did it! Life is about the stories one can tell, isn’t it?

One indispensible piece of equipment aboard that has worked well despite distance and rough seas has been our Sirius Satellite Radio, which, being Parrotheads, we’ve had tuned to Radio Margaritaville the entire time. Something about hearing Jimmy Buffett while you’re out at sea….pretty cool to have “A Pirate Looks At Forty”, “One Particular Harbour”, “Southern Cross” or any other ocean-loving tune playing in one’s ear when looking at the impossibly blue water 500 miles from landfall!
Hugs to all, Karyn and Ron at 4:14 AM