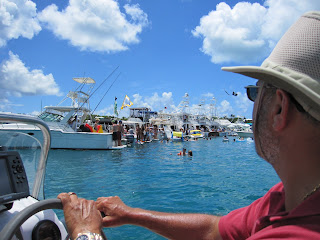 Ron surveying the scene as we arrived

Bermuda’s annual Non-Mariners Race took place at Mangrove Bay in Sandys Parish on Sunday afternoon. The object of this boat ‘race’ is to bang a few pieces of wood or other "non-mariner" objects together (in the original race, it was baby buggies) and attempt to row or sail their way from Mangrove Bay in Somerset across to the Sandys Boat Club wharf. Most vessels sink or fall apart immediately, but that's expected and part of the competition! It's a Bermuda tradition that's now over 30 years old, and we were thrilled to have a chance to attend.

We three arrived via our dinghy, Eclipse, after bouncing our way across Bermuda's North Lagoon in choppy waves to see an amazing array of rafted-up boats. They were there in startling numbers, in groups of 2 to 10: raft-ups, flags flying, music blaring, people everywhere and drinks flowing! There was a starting line for the Non-Mariners race, but I doubt anyone but those close in saw it, since there were 200+ vessels crowded in the Bay with jet skis cruising about, canoes and rafts bumping as they paddled amongst a ragtag mob of inebriated mariners and non-mariners alike. As far as the race went, each "entry" of shabbily-constructed materials typically had a theme that reflected some local political scandal that non-natives were blissfully unaware of. 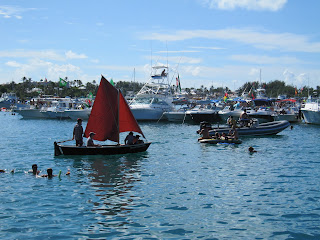 Boats of all shapes and sizes 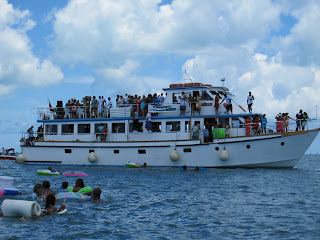 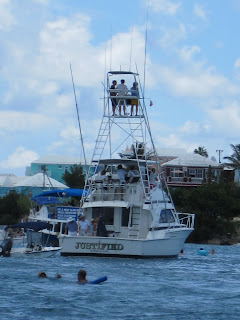 Justified jockeying for space in the Bay

We tied Eclipse, off the stern of Justified, a 45' Bertram sportfish belonging to our friend Justin, and helped him anchor amid the chaos and tight space available. It took some doing, but Karyn worked her magic with the anchor chain and rode along with Simon, a mate of Justin's. Along with a few other friends, Justin was hosting Bermuda's Governor, Sir Richard Hugh Turton Gozney, KCMG and his family, so it was rather special! Justin had lovely spread of food and drink aboard, done up just beautifully, and everyone enjoyed themselves. Not only that, but rafted up to Justified was the boat of the Commodore of the Royal Bermuda Yacht Club, Ralph Richardson, and his family. Ralph is also the author of "The Bermuda Boater," which Karyn happened to purchase prior to our arrival here in hopes of finding more information about Bermuda! Who would have thought the crew of Equinox would be rubbing shoulders with such folks? It was a great afternoon of champagne, interesting conversations, bright, hot sunshine and swimming to shore (which was refreshing but a long, long, long swim, let me tell you! Returning to the boat was daunting, but we all did it!) The best part was just watching the fun partying scene! 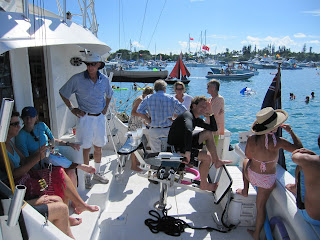 The scene on Justified's aft cockpit

We actually never did see the Non-Mariners race, being a bit far from the action, but as Bermuda's daily newspaper, The Royal Gazette, reported: "Non-winners of the race were undeclared and difficult to determine with several floats toppling over simultaneously, but one undeclared winner may have also captured a non-title." A day devoted to silliness and fun in a very Bermudian fashion!! We MUST attend next year!