Back in Baltimore: busy busy busy!

Since we've been back in Maryland, Ally's been busy with her girlfriends. This week, she's been enjoying the last bit of summer before her senior year. Hard to believe she's turning 17 this Saturday. Seems just like yesterday she was only heading off to kindergarten, not gearing up for college!! But she's definitely all grown up, going out with her girlfriends to the pool or the mall or to movies and dinner. She's quite the socialite!
We've not neglected our social lives either though, as Tuesday evening we met our new boat neighbors, Susan and Don off Passage, a 55' Fleming based in Jacksonville, Florida. They came over for a few sundowners and we traded stories until rather late. Then, last night we hosted some of Ron's former work folks aboard for a "Taste of Bermuda" party, complete with Dark 'n' Stormies, and Bermuda Fish Chowder. Everyone agreed it was delicious and for me, it really brought back memories of the Rock. I really do miss all our friends there, as well as the singing frogs!! They made such a pretty background sound to the evenings... 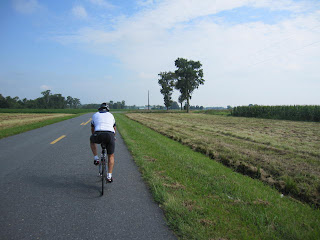 Riding on the eastern shore, near Cambridge, MD
Ron and I have been cycling a lot lately, prepping for our trip in October to California. We're going to be combining a lot of things: a visit with Ron's step-brother, John Paul in Santa Cruz; a trip to Arcturus Marine for a class on the care and maintenance of our Trac stabilizers, which we have on Equinox; and a cycling trip around the Russian River/Sonoma County area. We're really looking forward to all of it! While we've been cycling at every port of call -- around Annapolis and Cambridge just this past week -- it's all fairly flat along the seaboard there. We did a zippy 20 miles in Annapolis out to Arundel by the Bay, Thomas Point and Bay Ridge neighborhoods, averaging 17 mph (which for us is good, what can I say?) on Tuesday morning, but again, it's all pretty flat.
So, in order to be ready for the hills in CA, we've been hitting the hills of the horse country of Northern Baltimore County and Carroll County. We did 30 miles this morning, after a good 24 miles yesterday. Just trying to build up the endurance so we're not embarrassed in all rolling hills in California! Although, I'm not sure how hard folks will be riding in CA...after all, it's a tour of the wine country, and somehow I suspect that may influence things! 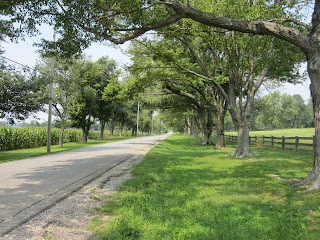 Horse country of Northern Baltimore county
So, other than cycling, our days have been busy running about getting the scuba gear and tanks inspected and overhauled, running to Target and Office Depot for Ally's back-to-school needs, finding a battery store, going to Tochterman's Fishing Tackle store to clean the reels and replace the line we lost on the way back from Bermuda, going to the bicycle store for new tires and the like, hauling the old Carver props out of the shed at the house in order to sell them to a buddy of ours who has a Carver 56 as well....LOTS getting done, and more lists being made of things to do before the voyage south this autumn. September is nearly upon us!
Hugs to all, Karyn and Ron at 5:52 PM