Dinghy Cruise in Cape May

Well, now that we're back in the States, we've done a lot of maintenance work on the boat this week, which unfortunately included a visit from the AC repair guy to confirm our worst suspicions: the compressor in our Captains' Quarters isn’t working. (Ron says "Argh!", although I secretly confess that I'm okay with it since I don't care for AC, myself!) Thankfully, the parts will be covered under warranty, but it isn’t going to be a cheap fix, much to our dismay. Darn!! It’s always something on a boat! At least the weather has been cooler, so we’ve been able to use the fan in our room at night so we’re not sweltering. Nothing like the humidity of the mid-Atlantic in August! 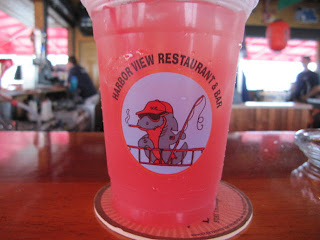 A Sea Breeze at the Harbor View
While the girls were at the beach, Ron and I took a dinghy cruise around the harbor….definitely shades of years past when the Baldonis were here with us, although this was an abbreviated dinghy crawl due to impending rain. Still, we hit the Harbor View restaurant for some oysters and sushi (Ron raved about the calamari salad, saying it was the best he’d ever had!). We meandered over to the canal near South Jersey Marina amongst the big commercial fishing boats and the quintessentially New Jersey boat houses on stilts over the water. Some of them are in true disrepair, others are barely hanging on, but it’s so New Jersey, I love it! We eventually continued around, ducking under the Rt. 109 bridge to dock up at Lucky Bones for a shared plate of delicious ribs at the bar. Despite our best efforts, we couldn’t muster up the energy to continue the crawl, but simply came around through the Ferry Channel back to Canyon Club for an early night. Can't claim it's jet lag, now can we? 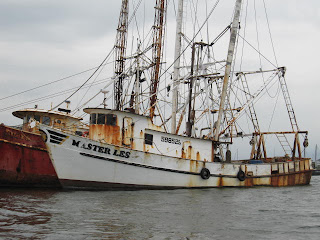 The Master Les-- one of the commercial fishing vessels docked up near the Lobster House. 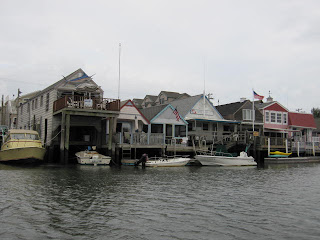 Some of the cozy canal homes 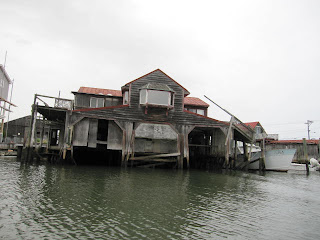 A little "Fixer-Upper" of a canal house in Cape May
Hugs to all, Karyn and Ron at 9:03 PM