Clearing Out and Tour of Bermuda Harbour Radio!

A busy, busy day for the crew of Equinox, who continued the preparations for departure. Karyn and Ron were up early, battening down the vessel, stowing away any potentially fly-away objects, doing engine room checks and all the necessary pre-departure details. With a heavy heart, we hauled anchor this morning to leave our little cove in Castle Harbor. True to its name, our anchorage was indeed Cable Bay, as we pulled up a heavy cable with the anchor as it broke the surface! Ally was already in Eclipse, ready to take it around Ferry Reach to St. George's, so Karyn jumped in; with Ally maneuvering the dinghy and Ron manning the windlass, she was able to lift the cable free from the anchor. Whew! Heavy duty industrial cable…whatever was it for? Certainly kept us from dragging anchor while we were there! Hurricane hole, anyone?

Newly freed, Equinox set out and threaded her way out Castle Roads past the outer reefs along Bermuda’s south shore. Having gone through it dozens of time with Eclipse to go out diving still isn't the same as taking one's deep draft boat through. We had plenty of water and Ron had no problems bringing us out through the reefs and around to Town Cut and into St. George's Harbour. We tied up at Ordnance Island to clear out with Customs, which went very smoothly... and quickly! We retrieved our flares and pole-spears, and locked everything back up aboard before we received our precious Form 5. With that in hand, we proceeded to Dowling’s to await the Shell fuel truck bringing our load of duty-free diesel. At .70/liter, it was considerably less than the $1.48/liter that gasoline cost, and worth the arrangements.

While we awaited the fuel truck’s arrival, Ron and I loaded up on gifts for our friends stateside. Being a bit creative, we are planning a “Bit of Bermuda” party upon our return, so we loaded up with cases of Barritt’s Ginger Beer and a few bottles of Gosling’s Black Seal Black Rum, so that we can have Dark ‘N’ Stormies as the cocktail of choice for everyone. The piece de resistance, though, is the gallon of Bermuda Fish Chowder from Barracuda/Hog Penny that that Ron bought Monday night, which is currently residing in the freezer for the journey home! We also have the requisite Outerbridges Sherry Pepper Sauce to add to it, to make it truly authentic, in order to give everyone a good taste of Bermuda. It took us each three trips from the liquor store to bring back all the cases of Ginger Beer! After one last trip to the market for fresh veggies for the next few days, the fuel truck arrived and we put on 3984 liters of diesel, topping off the tanks and giving us plenty of fuel for the 650-mile trip back. Karyn went back with the truck to the fuel depot to pay; in true Bermudian fashion, the cashier was out to lunch upon arrival, so ended up having a nice 20-minute chat with the driver until the cashier returned. Folks are so nice here in Bermuda!! 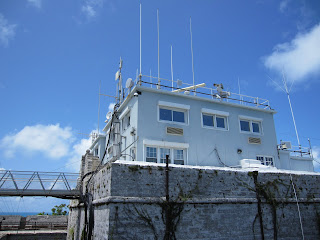 The highlight of the afternoon was a private tour of Bermuda Harbour Radio, located at Fort George on the highest point on St. George’s Island. Our friend, Scott Simmons, is the Chief Radio Officer for BHR and arranged to meet us to show us the inner workings of the lookout station. It was really pretty cool to climb the (very) steep hill to find a 3-centuries-old fort, then cross its deep, three-story moat to enter a high-tech radar and radio installation! 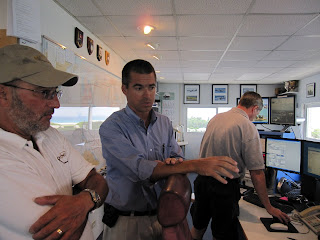 Scott showed us their radar tracking station and the variety of computers and radio workstations that they use to communicate wtih all the ships inbound and outbound. We were introduced to Tom, Nick and Peter, the technicians on duty, all of whom we've heard or spoken to over the VHF when we were first making landfall in Bermuda. The courtesy and dedication of the radio technicians is very impressive and seeing them in action was a real treat! As any sailor or cruiser who enters Bermuda by ship for the first time can attest, there is nothing better than hearing the calm, courteous and welcoming voice of Bermuda Harbour Radio (callsign VBR) after days at sea!! 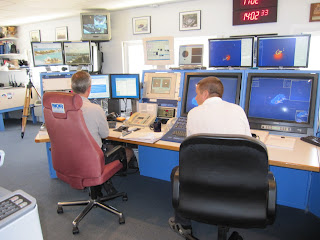 The radio techs at their stations 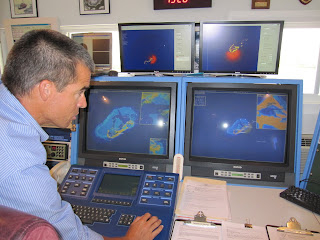 Scott pulling up Equinox on their AIS radar for St. George's Harbour

While we were there, the cruise ship Norwegian Majesty came into the harbor, and we got to listen to VBR giving them clearance to enter Town Cut. Watching the boat from the vantage point of Ft. George was pretty cool as the ship squeezed through the tight cut into the harbor! Check out the following few photos as it came through the cut: 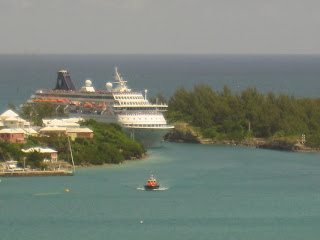 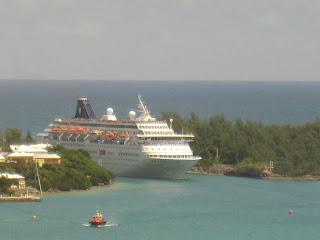 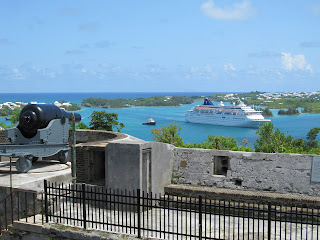 The ship finally into the harbor 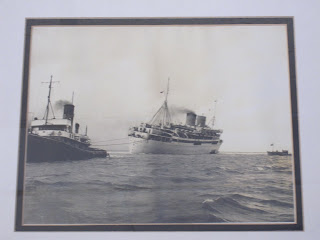 A ship aground in years past, a reminder of
the importance of Bermuda Harbour Radio!
Hugs to all, Karyn and Ron at 1:58 PM