As Ron says, he loves it when a plan comes together!! We had a smooth, calm run down the Chesapeake last night, doing 4-hour watches. Ron was at the helm most of the afternoon and evening, which was smooth as silk and muted in pale colors. This being October, not many folks were out on the Bay, and it was just magnificent cruising!! 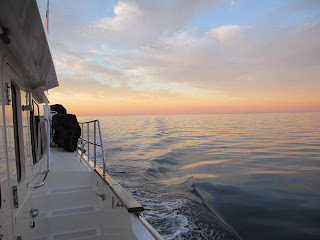 Just after an amazing sunset (see photo below!) Karyn took the 8 pm-midnight watch per usual. Again, more appreciation time, as it was just so gorgeous!! The moonlight peeking through the clouds, reflecting off the water....beautiful! 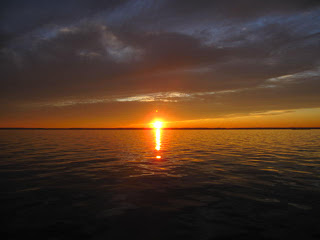 There wasn’t too much tug or commercial traffic out initially, although once dark, we were heading south with a couple of the Coast tugs. Just north of Smith Point, I kept seeing this radar signature that didn’t match anything, and try as I might, I couldn’t see what it was. I made sure I was clear of it by running just outside the channel, luckily, because a few minutes later, one of the tugs notified the Coast Guard about an abandoned vessel adrift! Radar is a wonderful thing!

About 1100 Equinox was hailed by one of the big cargo carriers coming up the Bay, and I was a bit startled to hear the pilot ask “Is this Karyn?” It was one of the Maryland pilots with whom we’re acquainted, Capt.B!! It was delightful to hear from him; we’d been trying to connect all summer, but between our schedules, we kept missing each other. He’s kept an eye on our Blog, as he does a lot of diving (and obviously, boating) himself, so we wanted a chance to chat and compare notes on cruising, etc. I’m sure our paths will cross again, perhaps next summer when we’re back in the Bay for Ally’s graduation in June. In the meantime, it was a treat to talk with him briefly while underway, as it brightened the tail end of my watch! (By the way, I enjoy the Pilots’ Association coffee mug, and use it daily!! It’s my favorite aboard!)

Ron took the midnight - 4 am. watch, which was uneventful and serene. Ron loves checking out the night sky; it was so crisp and clear at times, the stars were just popping out! I relieved him at 4 am, and brought Equinox around Thimble Shoals and into Hampton Roads just as dawn was breaking. Thankfully it was so early, that there was little traffic except for a few tugs, although by the time Ron was up and back at the helm, there were several other cruisers heading south with us as we passed Mile Marker “0” (ICW flashing red buoy 36). We were like ducks in a row! 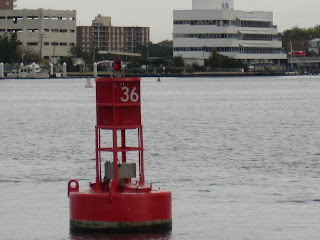 One thing about the ICW...because it's so narrow in spots, with bottle-necks at the bridges, every boat is in continued contact with all the folks in the boats around you, as there is no way you are going to outrun anyone. Passing obnoxiously, letting tempers flare on the radio....it's all in vain as everyone ends up at the same few marinas, and quite possibly the same restaurant for dinner!! (Lesson is: be polite & courteous -- it's not that hard!!) 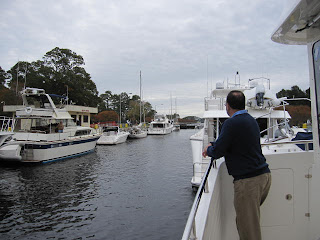 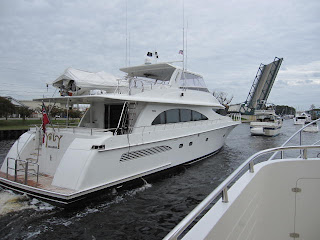 very next bridge. Of course, there were 7 boats ahead that

he also tried to maneuver around in a tight, tight area.

The boat only made it to Coinjock, just like the rest of us.

After a good 7 hours of cruising southbound, going though one lock, battling currents and crowds of boats at multiple bridges, keeping a sharp eye out for submerged logs, and trying to maintain decent speed, we finally got to Coinjock, NC at 3:30 pm where we are moored for the night at the Midway Marina and Motel. There isn't a better stopping point in this section of the ICW as facilities are rather limited further on, and as only a couple of hours of daylight remained, we were more than happy to be here. Just as we finished getting tied up and secure, the weather closed in and the rain started in earnest. As Ron says, he loves it when a plan comes together!! Tonight: early dinner and earlier bedtime!! It's been a long day, but...it was a lovely cruise!!